Hold on Tight by Abbi Glines, published by Simon and Schuster in October 2014

Goodreads synopsis:
Six years ago, Dewayne Falco's life changed. He lost someone he never expected to lose. Resigned to punish himself for something he felt he could have prevented, he goes through life without getting too close to anyone.  What he didn't expect was for the girl across the street to move back home and remind him of what they both lost: Dewayne's younger brother Dustin.

Sienna Roy loved Dustin Falco most of her life. He was the boy next door, the high school basketball star and her best friend. But when his life was cut short, she realized he left a part of himself behind.

Now, she's back in Sea Breeze, thankful to have a home but not sure if she can ever forgive the people across the street who abandoned her when she needed them the most — The Falcos. 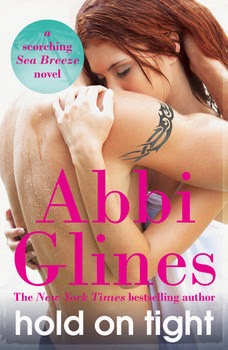 Review:
Dewayne Falco has been a permanent fixture in Sea Breeze since the start of this brilliant series.  Always in the background and usually drunk, with a different woman on his arm every night, he's been somewhat of an elusive figure.  Part of Preston, Cage and Marcus's group of friends, not much has been revealed about his own past...until now.

I love the way that Abbi Glines can take a character who you think you've made up your mind about and then get you to completely change your opinion of them within a couple of pages.  That's exactly what happened with Dewayne, who I thought I wasn't going to like, judging from what I'd seen of him in previous books, but whom I absolutely ended up loving.  If you think he's just a shallow, egotistical ladies man then think again.  There's much more to Dewayne Falco than first meets the eye.

As well as hot, swoonworthy men, Abbi Glines also writes wonderful female characters and Sienna was no exception.  The love she has for her son shines out from every page and it's evident from the start that she will do anything to try and give him the happiness he deserves.  She puts aside her own feelings to welcome the Falco family back into their lives and she is totally selfless when it comes to Micah.  He, of course, is an absolute cutie and impossible to resist.

It's obvious from the beginning that Sienna and Dewayne should be together but seeing them work out the mistakes and misunderstandings of their past is what makes this such an enjoyable read.  They have to get past the ghost of Dewayne's brother Dustin first but I loved seeing them rediscover each other again.

In my opinion, Abbi Glines never puts a foot wrong and I adore each and every one of her books.  She is on my auto-buy list and I know I'm in safe hands when I read one of her stories.  She never disappoints!
Posted by Samantha (A Dream of Books) at 00:00