Remember Me by Romily Bernard, published by Simon and Schuster in October 2014

Goodreads synopsis:
"Remember Me."These are the words carved on the dead body of a local judge's assistant . . . the same local judge who sarcastic teen hacker, Wick Tate, is investigating as part of her undercover hacking for her not-exactly-favourite cop, Detective Carson.

In this edge-of-your-seat thrilling sequel to Find Me, Wick had thought her troubles were over. But she should've known better. Now she is once again dealing with criminals and corrupt cops . . . and a brooding new love interest. The pressure might be too much, as secrets -including Wick's own - climb to the surface. Will Wick persevere like she has before? 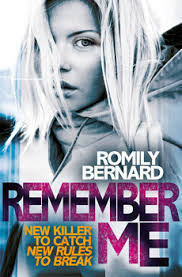 Review:
Wick Tate returns in this second thrilling read by Romily Bernard.  After the events of 'Find Me', Wick is desperately trying to get things back to normal but the consequences of her actions are still reverberating throughout her home, school and personal life.  Being used by Detective Carson was not what she had in mind but she is determined to keep her sister and adoptive mother safe, so she's willing to go to any lengths to ensure that they don't get hurt.

Throughout the course of the book, Wick also begins to find out more about her biological mother's death.  This was a really fascinating addition to the plot and begins to change Wick's view of everything that had happened to her family in the past.  It also leads to a lot of surprising revelations which I certainly didn't see coming.

Wick is one of my favourite female protagonists.  She has had to deal with more than anyone her age should have but boy, is she tough.  Even when she suffers knockbacks, she gets right back up and keeps on going.  In the previous book, she had the fabulous Griff to lean on, but after everything that has happened, problems start to arise between the two of them.  As much as I love Griff, I really liked the addition of Milo to the story.  He and Wick have a lot in common and they work so well together.  They have a connection from the start which felt very real and the more I saw them together, the more I found myself rooting for them.

'Remember Me' is a brilliantly tense, gripping and thrilling read.  The mystery is multi-layered and the shocks and surprises just keep on coming.  The story is fast paced and addictive and you won't be able to put it down.  I can certainly guarantee that you will be left wanting more from this brilliant author.
Posted by Samantha (A Dream of Books) at 00:00