Review: The Rise and Rise of Tabitha Baird - Arabella Weir

The Rise and Rise of Tabitha Baird by Arabella Weir, published by Piccadilly Press on 2nd October 2014

Goodreads synopsis:
When 13-year-old Tab Baird starts at a new school, she's determined to be the coolest, most popular girl there - whatever it takes. She adjusts her school skirt so it's just the right length. She has enough attitude to make it into the in-crowd. She even gets the attention of the hottest guys. But it's not easy being uber-cool. No one must find out that her mum, brother and her have moved into her gran's house, so she tries to persuade Gran to pose as a house-keeper. And if anyone discovers her mum's blog - about her teenage daughter - it'll be the ultimate in social death. 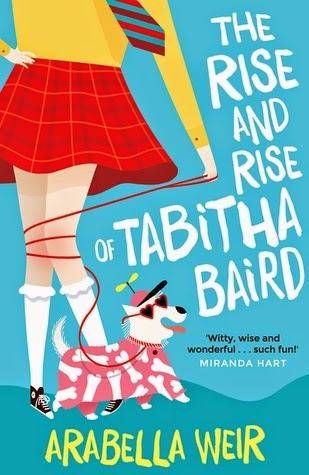 Review:
This is the first book about thirteen year old Tabitha Baird who at the beginning of the story finds herself having to start at a new school and get used to living in her Gran's house with her mum and younger brother.  Luckily Tabitha does it all with a smile...most of the time!

This was such a funny, light-hearted and entertaining read.  Arabella Weir has created a fantastically irrepressible character who I enjoyed laughing along with, as well as seeing how she extricates herself from one muddle after another.  You can't help but like Tabitha.  She has a great narrative voice and the book is told in diary style so we get to hear all about her misadventures, both at school and at home.

I liked the fact that although she has some big adjustments going on in her life, she is a pretty positive and upbeat person.  Her Dad's no longer living with them because he's an alcoholic but she still tries to give him a chance, even when things start to go wrong.  There's a good mix in the book of more serious matters, as well as plenty of humour which I think readers will enjoy.

I have to admit that I adored Basil too, her Gran's westie dog, who is always being made to wear ridiculous knitted outfits.  Luckily Basil comes in handy when Tabitha comes across a gorgeous boy also out dog walking which leads to her trying to engineer a proper meeting.

Luckily, there is set to be another book in the series called 'The Endless Trials of Tabitha Baird' which I'm sure will have me laughing out loud as much as this one did.