Exodus by Julie Bertagna, originally published by Macmillan in 2002 and reissued in February 2011

Goodreads synopsis:
Less than a hundred years from now, the world as we know it no longer exists. Cities have disappeared beneath the sea, technology no longer functions, and human civilization has reverted to a much more primitive state.

On an isolated northern island, the people of Wing are trying to hold onto their way of life - even as the sea continues to claim precious acres and threatens to claim their very lives. Only fifteen-year-old Mara has the vision and the will to lead her people in search of a new beginning in this harsh, unfamiliar world.

This compelling and powerful story set in the near future will hit home with teens, especially those who are ever more aware of the increasingly controversial climate crisis we face in our world today. 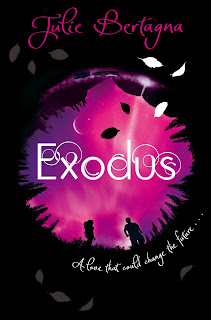 Review:
'Exodus' takes a giant leap into the future and is set in 2099 at a time when global warming has wreaked havoc on the planet and the melting of the polar icecaps has led to mass flooding and destruction.  The story begins on the island of Wing which is in danger of being engulfed by the rising sea level.  When the situation worsens the residents of the island have to set out to seek new land and a new life.

The story is told through the eyes of Mara who has never known a life beyond the one her and her family have led on Wing.  One night when she is wizzing through the Weave (which seems to be a version of the web), she stumbles across a Fox who shows her evidence that the mythical Sky Cities really do exist.  She convinces the other islanders to leave their homes behind but what they find may not be the safe haven they were hoping for.

Julie Bertagna has written a fast-paced story which is both immensely enjoyable as well as educational.  A serious ecological and environmental message is conveyed throughout and provides a warning about the sustainability of the earth and how we look after the planet.  This is done in a way which doesn't come across as being too preachy but actually makes you stop and think about some of the issues which are raised.

I found the plot totally absorbing.  It really kicks into gear in the middle section of the book where the islanders arrive on the outskirts of New Mungo.  The nightmare which faces them is both horrifying and shocking and I ended up turning the pages faster and faster as the story progressed, right up until the climatic finale.

Mara is a great central character.  She's intelligent and brave and a born leader and she has a well-honed sense of survival which stands her in good stead for some of the situations she has to face.  She has to make tough decisions at times and find a strength within her which she never thought she had.  Her friendship with Fox develops near the latter part of the book and he is a bright spot for her in an otherwise bleak world.   I found some of the scenes between the two of them heartrending but also hopeful.  I like the fact that even amidst the devastation around them, they manage to find each other and each inspire something in the other.

The predictions made in 'Exodus' about the future are terrifying and appalling and the themes and issues are extremely thought-provoking.  I thought that the story was full of suspense and action and was fantastically imaginative and inventive.

You can read an extract from 'Exodus' here

Thanks to the publisher for sending this one for review
Posted by Samantha (A Dream of Books) at 00:00