Zenith by Julie Bertagna, originally published by Macmillan in 2007 and reissued in February 2011

Goodreads synopsis:
In this compelling continuation of Julie Bertagna’s timely trilogy, the search for a future remains a terrifying fight for survival.

Sixteen-year-old Mara and her ship of refugees are tracking the North Star in search of land in the mountains of Greenland to call home. A Gypsea boy named Tuck, orphaned when Mara’s ship plows through his floating city, becomes inextricably linked to their fate. Meanwhile, back in the drowned ruins at the feet of the towering sky city, Fox begins his battle with the cruel, corrupt rulers of the New World.

Forced to make their own new beginnings in a savage world, three teens must struggle to make sense of the past, overcome the harsh dangers of the present, and build a future worth living. 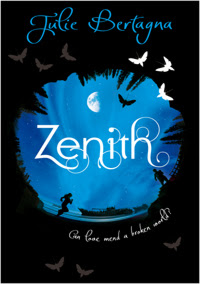 Review:
'Zenith' is the sequel to 'Exodus' and continues the story of Mara as she searches for a home in the North.  Now aboard a ship with refugees from New Mungo, Mara has a terrifying journey ahead of her as she seeks to find Greenland and a safe place where she can begin to build a new home.  Having left Fox behind to fight his own battle, she has to face loss and heartbreak as she clings to survival.

When the ship she's aboard crashes into a city of boats, barges and bridges, they cause untold chaos and destruction.  Tuck, a gypsea who has only ever lived at sea, joins the chase for revenge as they hunt down the ship.  But new struggles face both Mara and Tuck as their paths cross and they face new dangers and challenges to their very existence.

The book's chapters alternate between the stories of Mara, Tuck and Fox and their viewpoints are told in the present tense as they cope with an uncertain future.  I did find that in places the story was a little slow and not quite as exciting as the first installment.  A lot of plot threads were set up but a lot was still left hanging at the end and I didn't find the ending satisfying at all.  There's so much that needs to be sorted out.  I can only imagine that people reading this book back in 2007 must have been tearing their hair out at the end!  Luckily, I don't have long to wait as the final part of the trilogy, 'Aurora' is published on 3rd June 2011.

This is a brutal depiction of a future which has been marred by environmental devastation.  Stark and terrible, the book itself is a warning about the treatment of our planet.  Although I didn't enjoy it as much as 'Exodus', I thought that the character development was extremely good and there were a number of surprising twists which kept me in suspense.  There's a sense of adventure and excitement throughout and I found all the new discoveries that they made extremely fascinating.

The second book in a trilogy is always difficult but although I think it suffered slightly for this reason, I'm definitely still looking forward to seeing what Julie Bertagna has in store for the big finale.

Thanks to the publisher for sending this one for review
Posted by Samantha (A Dream of Books) at 00:00