Desires of the Dead by Kimberly Derting, published by Headline on 17th March 2011

The missing dead call to Violet. They want to be found.

When Violet Ambrose's morbid ability to sense the echoes of those who've been murdered leads her to the body of a young boy, she draws the attention of the FBI. She is reluctantly pulled into an investigation that will endanger more than just her secret...but her relationship and possibly her life as well. 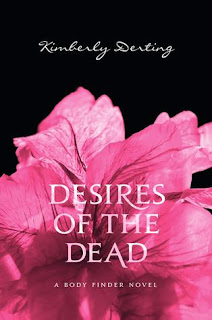 Review:
'The Body Finder' was one of the best YA novels by a debut author in 2010.  Kimberly Derting has managed to exceed all expectations by writing a stunning knock-out sequel.  It's gripping, exciting, full of twists and turns and an all-round amazing read.

'Desires of the Dead' delivers what every fan of the first book wanted to see, Violet and Jay finally together as boyfriend and girlfriend.  If you love this couple then you're definitely going to be picking this book up for repeated readings.  There are some wonderfully romantic moments between the two of them that are sure to satisfy fans of theirs and if possible, Jay is even more delicious this time around!  He's perfect boyfriend material and is so loving, caring and attentive that it's a shame there isn't a Jay to go around for everyone.  The book shows them adjusting to life as a couple instead of just best friends and navigating the ups and downs that this leads to.

Although their romance does take centre stage, there is plenty more to keep the reader's attention riveted.  Violet is being plagued by eerie and threatening notes and strange echoes, as well as having to deal with a persistent FBI agent who seems to know that Violet's hiding a big secret.  Violet's gift is further explored as well as the issue of whether or not she should keep it from the people around her.  Is there a way that she can actually use her ability to help those in need?

Several new characters are introduced throughout, including Sara Priest, the FBI agent and Rafe, the strange boy who may also have a psychic talent.  Is there a future love triangle on the cards?  Jay and Violet's romance seems so solid that maybe a couple of obstacles are going to be thrown in their path at some point.

I found myself completely absorbed by Violet's story and unable to put this book down. It's paranormal romance at its very best - suspenseful, addictive and sexy!

Thanks to the publisher for sending this one for review
Posted by Samantha (A Dream of Books) at 11:27