Night Star by Alyson Noel, published by Macmillan in 2011

Goodreads synopsis:
Haven still blames Ever for the death of her boyfriend Roman, no matter how hard Ever’s tried to convince her it was an accident. Now she’s determined to take Ever down…and destroy Damen and Jude along the way. Her first step is to tear Ever and Damen apart—and she has just the ammunition to do it.

Hidden in one of Ever’s past lives is a terrible secret about Damen—a secret that illuminates new facts about her relationship with Jude, but that’s so dark and brutal it might be enough to drive her and Damen apart once and for all. As Ever faces her greatest fears about the guy she wants to spend eternity with, she’s thrust into a deadly clash with Haven that could destroy them all.

Now it’ll take everything she’s got—and bring out powers she never knew she had—to face down her most formidable enemy. But in order to win, she must first ask herself: is her own survival worth dooming Haven to an eternity of darkness in the Shadowland? And will learning the truth about Damen’s past hold the key to their future? 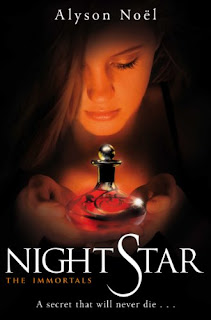 Warning that there might be spoilers from previous books in the series.

I was so excited to receive the fifth book in The Immortals series.  It's turned me into a huge fan of Alyson Noel and I want to get my hands on everything else she's written now as well.  I love paranormal romances and the one between Ever and Damen is captivating and thrilling and warms my heart!  Ahhhh!

One of my favourite things about this book was getting to find out more about Ever's past lives and the truth that Damen had been hiding from her.  I think that for them to be together properly, they need to be absolutely honest with each other and have nothing standing between them.  So far, numerous obstacles have been put in their path but 'Night Star' seems to take a definite step towards resolving this and clearing the way for their love to grow.  The love triangle angle with Jude is also resolved and Ever's indecision is finally put to rest.  I have to reiterate (from my previous reviews) that I love Jude!  I think it would be interesting if Ever would give him a proper chance but then I'm sure that there would be a lot of Ever/Damen fans who would be very unhappy if they didn't finally get to be together.

The main storyline revolves around Ever's relationship with her former best friend, Haven who is intent on destroying Ever in revenge for the death of Roman.  I like the way in which Haven becoming an Immortal is such a complete contrast with Ever's transformation.  Haven has always been a bit of a lost soul but with her newly gifted powers she's in danger of getting out of control and ruining the lives of those around her.  This nicely illustrates the way in which people are affected and influenced by those around them.  Ever has always had Damen by her side to guide her and help her on her path but Haven was under the influence of Roman who seems to have left Haven to fend for herself.  The question is: can Haven still be saved?

I'm also intrigued about the dark side of Summerland which is depicted in the book.  Questions surround what it really is and how it came into fruition but obviously these are all going to be answered soon enough.

'Night Star' plunges into the action from the start and the pace keeps up until the very end.  There's little preamble and the story is gripping from start to finish.  There are plenty of twists and turns to keep the reader entranced and the overall message of the book is one about being positive and learning true acceptance.  Ever has struggled at times throughout the series with these particular aspects but her character has grown and matured and she finally seems to be putting into action the things she's learnt and not making the same mistakes again and again.

This series is addictive and unputdownable.  The romance between Ever and Damen is completely engrossing and not only is there a wonderful cast of characters but also an exciting and thrilling plot.

The last book in the series 'Everlasting' is published on 7th June 2011, so luckily not too long to wait.  The cover art is absolutely gorgeous!  I can't wait to get my hands on it and discover if Ever and Damen do end up being together for all eternity.
Posted by Samantha (A Dream of Books) at 00:00