Shadowland by Alyson Noel, published by Macmillan in 2010

Goodreads synopsis:
Ever and Damen have traveled through countless past lives—and fought off the world’s darkest enemies—so they could be together forever. But just when their long-awaited destiny is finally within reach, a powerful curse falls upon Damen…one that could destroy everything. Now a single touch of their hands or a soft brush of their lips could mean sudden death—plunging Damen into the Shadowland. Desperate to break the curse and save Damen, Ever immerses herself in magick—and gets help from an unexpected source…a surfer named Jude.

Although she and Jude have only just met, he feels startlingly familiar. Despite her fierce loyalty to Damen, Ever is drawn to Jude, a green-eyed golden boy with magical talents and a mysterious past. She’s always believed Damen to be her soulmate and one true love—and she still believes it to be true. But as Damen pulls away to save them, Ever’s connection with Jude grows stronger—and tests her love for Damen like never before… 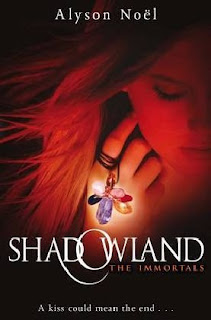 This series just keeps getting better and better.  I am well and truly hooked!  So much so that I don't want to leave the house now until I've finished the remaining books!

In 'Shadowland', Ever has to deal with the consequences of her actions at the end of 'Blue Moon' and is desperately searching for a way in which she and Damen can be together.  She has to find the antidote for Damen, as well as face up to the mistake she made in trusting Roman.  The plot sounds a little repetitive with yet another obstacle coming between the two of them but their relationship is central to the whole series and I'm desperately rooting for them to get their happy ending.

As much as I like Damen, Noel introduces a new character into the mix and he certainly stole my heart.  Jude is a laid back and relaxed surfing fanatic, who also happens to be super hot with psychic abilities which interest and intrigue Ever.  She finds herself being drawn to him and it looks like Damen might finally have a proper rival for her attentions.  I absolutely loved the twist which is revealed about his character.  It works perfectly with the story but is also so unexpected that you'd never guess his secret.  I really hope we get to see lots more of Jude throughout the rest of the series.  His character also compliments Damen's nicely - one dark and twisty and complicated and the other light and simple and straightforward.  Which one will Ever choose?  This love triangle is absolutely intriguing.

I love the fact that Ever has to deal with supernatural problems as well as everyday issues such as her Aunt dating her teacher, who incidentally, just happens to know her secret!

One of the things I particularly liked about 'Shadowland' is the idea of karma and the notion that every action has a consequence.  By the sounds of it, Damen has quite a chequered past and has done several things roughout his 600 years which he now regrets.  He tries to put right some of those those things although he doesn't always go about it in the best way.  Questions are also raised about the sanctity of the soul - Damen is determined to protect his and Ever's souls at all costs so that they don't end up alone for eternity in Shadowland.  The issue of living forever is touched upon and the downside depicted; having to face seeing everyone that you love die eventually and knowing that you can never join them, plus having to keep on the move so that people don't suspect you're not capable of ageing.  In addition, there's the issue of living through so many technological changes and advancements throughout the centuries and being witness to major historical events.

The ending of the book yet again took me completely by surprise.  I didn't see the twist coming at all but it should mean that 'Dark Flame', the next book in the series is going to be very, very interesting.  So far, this series has entranced and amazed me and I have a feeling that there are plenty more shocks in store.  I'm enjoying sharing Ever's story and being part of her exciting journey.
Posted by Samantha (A Dream of Books) at 00:00