Dark Flame by Alyson Noel, published by Macmillan in 2010

Goodreads synopsis:
Ever is trying to help Haven transition into life as an immortal.  But with Haven drunk on her new powers and acting recklessly, she poses the ultimate threat—exposing their secret world to the outside.  As Ever struggles to keep the Immortals hidden, it only propels Haven closer to the enemy—Roman and his evil companions.

At the same time, Ever delves deeper into dark magick to free Damen from Roman’s power. But when her spell backfires, it binds her to the one guy who’s hell-bent on her destruction. Now there’s a strange, foreign pulse coursing through her, and no matter what she does, she can’t stop thinking about Roman—and longing for his touch.  As she struggles to resist the fiery attraction threatening to consume her, Roman is more than willing to take advantage of her weakened state…and Ever edges closer and closer to surrender.

Frantic to break the spell before its too late, Ever turns to Jude for help, risking everything she knows and loves to save herself—and her future with Damen … 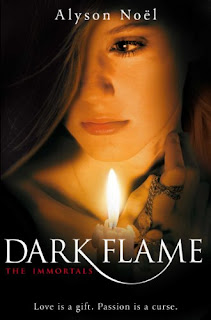 So far, this series has had me completely entranced but I have to say that although I enjoyed 'Dark Flame' it wasn't a stand-out installment in The Immortals series.  I felt that there was very little plot progression at all and it feels like Noel is starting to string the story out to keep it going for the final two books in the series.  Saying that however, I still enjoyed it enormously and the plot although slow, was still fascinating.  I'm really rooting for all the characters now and I will be so upset if they don't get a happy ending!

In book four, Ever has to cope with the repercussions of turning Haven into an Immortal.  She's also dealing with the threat of dark magick and her evergrowing attraction to Roman who she has bound herself to in a spell gone awry.  In addition, the love triangle between Ever, Damen and Jude is ramped up a notch and if that wasn't enough she has family problems too.  Poor old Ever, nothing ever seems to go right for her!

I'm still enjoying reading about Ever's tangled love life.  Boy, is it getting complicated though!  Damen loves Ever and Ever loves Damen but...Jude also loves Ever and Ever's attracted to him because of their past lives, plus Roman wants Ever and she wants him but only because of the mistake she made in binding herself to him.  Did you get all that?!  I have to say that I love Jude.  He's so easy-going and simple and what you see is what you get with him.  He does quite often seem to be in the wrong place at the wrong time but I think he's beautifully characterised and has such a pure soul.

Love is a key theme throughout the book and throughout the whole series.  'Dark Flame' focuses on the many forms in which love can take: pure love; the love of a soul mate; of a friend; unconditional love; selfish love.  Ever has to learn in which direction her heart is going to take her and discover what it is she truly desires.

I'm loving the characters of Romy and Rayne and an interesting secret about them is discovered in the book.  The plot surrounding them makes a nice contrast with Ever's story.  They're fun and witty and I think are going to prove to be very key to the conclusion of the series. I also thought that the development of Roman's character was handled well.  Yet again, it's shown that everything isn't always black or white; good or bad and that there's always a reason why people do the things they do or why things happen the way they do.

Although I didn't find this one quite as gripping as other installments, I'm still dying to know exactly how everything's going to turn out and what Alyson Noel's masterplan is for concluding Ever's journey.
Posted by Samantha (A Dream of Books) at 11:45