Blue Moon by Alyson Noel, published by Macmillan in 2010

Goodreads synopsis:
Things have changed for Ever since she met her beloved Damen - not least because she's got a whole new set of powers, courtesy of her new Immortal status. Just as she's getting stronger, though, Damen seems to be weakening. Panicked at the thought of losing him, Ever finds a path to the in-between world known as Summerland, where she learns the secrets of Damen's tortured past. But in searching for a cure for him, Ever accidentally discovers a way to twist time so she can save her family from the accident that killed them. It's all she's ever wanted - but so is Damen. And Ever must choose between them... 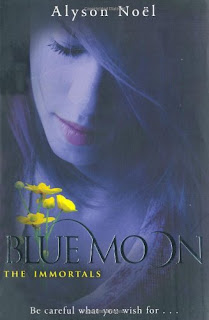 Review:
Warning that there might be spoilers from the previous book in the series.

Ever and Damen's captivating story continues in 'Blue Moon' the second book in The Immortals series by Alyson Noel.  At the end of 'Evermore' it looked like they were going to get their happy ever after but I have a feeling that there are going to be plenty more obstacles for them to overcome first.  I think that will only make it so much more satisfying when they do finally get to be together with nothing keeping them apart.

The story begins with a stranger called Roman arriving in town.  His arrival signals the start of everyone around Ever behaving strangely and acting out of character - including Damen.  Ever has to figure out what's wrong and how to put things right before she loses Damen...forever.  The plot is quite simple and at times is secondary to character development but I liked the fact that it was easy to follow and didn't get too complicated.  I also thought that the introduction of Roman shook things up nicely and he looks like he's going to be a fitting adversary for the happy couple.

I thought that this was a fantastic sequel which really built and expanded on the first book in the series.  I was looking forward to seeing more of the relationship between Damen and Ever now that she finally knows the truth about him and I was pleased that some light was shed on how they first met and all of Ever's previous incarnations.  I enjoyed discovering more about Damen's history too and how he first became an Immortal.  Several questions are answered but several more are raised and left for the reader to puzzle over.

Ever is growing on me more now and I admire many of the qualities she has such as her single-minded determination and grit.  She comes across as being very real because even though she's immortal, she makes big mistakes at times, just like any other human.  She also has to rely on her own instincts and not her boyfriends.  The relationship between her and her Aunt Sabine is well written - but I would love her Aunt to find out her secret because I think it would be interesting to see how she'd handle the situation.

The climax of the book was very exciting and the suspense is ramped up to an unbelievable level.  I whizzed through the last few chapters in the book, immediately reaching for the next installment so I could continue the story.  The Immortals is shaping up to be a fantastic series and exactly what fans of the paranormal romance genre are looking for.  I can't wait to see what Alyson Noel has in store for readers next!
Posted by Samantha (A Dream of Books) at 11:07