I was lucky enough to be sent the complete set of books in The Immortals series by Alyson Noel to review.  So get set for an Alyson Noel week on the blog.  I'm going to be reviewing books 1 to 5 all this week, including 'Night Star' which is published on Friday 4th March.

Evermore by Alyson Noel, published by Macmillan in 2009

Goodreads synopsis:
Since a horrible accident claimed the lives of her family, sixteen-year-old Ever can see auras, hear people’s thoughts, and know a person’s life story by touch.   Going out of her way to shield herself from human contact to suppress her abilities has branded her as a freak at her new high school—but everything changes when she meets Damen Auguste…

Ever sees Damen and feels an instant recognition.  He is gorgeous, exotic and wealthy, and he holds many secrets.  Damen is able to make things appear and disappear, he always seems to know what she’s thinking—and he’s the only one who can silence the noise and the random energy in her head.  She doesn’t know who he really is—or what he is.  Damen equal parts light and darkness, and he belongs to an enchanted new world where no one ever dies. 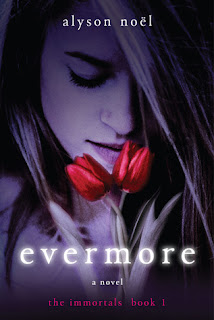 Review:
'Evermore' is the first book in the series and is about sixteen year old Ever Bloom who is living with her Aunt after a terrible car crash that killed her parents and her younger sister Riley.  After surviving the crash which robbed her of her family, Ever discovers that she has the power to hear the thoughts of the people around her and see their auras.  She tries to block this out by hiding herself under hooded sweatshirts and having her ipod on at all times but she can't block out new guy Damen Auguste who she seems inexplicably drawn towards.  He's mysterious and enigmatic, dark and handsome and her feelings for him might just end up changing her life forever.

What an amazing start to the series - I'm really excited to see where Alyson Noel's going to go next with the story and how she's going to develop all the characters.  I liked Ever and I loved her sister Riley (who has her own spin-off series).  I enjoy it when books capture the sibling relationship so well and the scenes between the two of them were among some of my favourite moments in the book.  Having the ability to still see her sister is a gift for Ever but there's still a healthy dose of realism in that they still fight and bicker like any sisters do!  She also has great friends - Haven and Miles are interesting and rounded characters and their involvement in the story was well integrated and added some fun scenes to the book.

Damen is an intriguing figure and although some information was revealed about his past, I'm looking forward to finding out more about his history and how he and Ever first originally met.  I was drawn to him and he certainly comes across as charismatic and charming but I'm hoping that there's also going to be more depth to his character.  He's got to be more than just a pretty face.

I thought that Noel's idea of the afterlife and the place in between which she calls Summerland was well thought out and wonderfully written.  I hope that we'll get to find out more about the latter throughout the rest of the series.

I liked the fact that this wasn't your typical vampire-fare.  Certain things in the book hinted at that (a red drink; incredible speed; never getting ill) and led the reader in that direction but the big reveal was so much more interesting and has set things up perfectly for the next book in the series.  The paranormal romance genre is big at the moment and I am a huge fan of these kinds of books but sometimes they can be a bit too similar and formulaic.  I thought that 'Evermore' felt really fresh and original and had an exciting and engaging plot which kept me hooked until the final pages.  I'm desperate now to rejoin Ever, Damen and co and find out what's going to happen to them next.
Posted by Samantha (A Dream of Books) at 00:00