Goodreads synopsis:
Agent 21 is the first in a brand-new action-packed adventure series by the real-life SAS hero.When Zak Darke's parents die in an unexplained mass murder he's left alone in the world. That is until he's sought out by a mysterious man: ‘I work for a government agency,’ the man tells him. ‘You don’t need to know which one. Not yet. All you need to know is that we’ve had our eye on you. There’s a possibility you could help us in certain . . . operational situations.’Zak becomes Agent 21. What happened to the 20 agents before him he'll never know. What he does know is that his life is about to change for ever . . 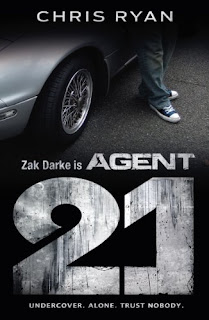 Review:
I’m a big fan of the Alex Rider books by Anthony Horowitz and the Young Bond books by Charlie Higson, so when I saw this in the library and read the blurb, I picked it up immediately because it sounded like a book in the same vein.  I’ve never read anything by Chris Ryan before but I know that he’s written mainly adult novels and has branched out into YA over recent years.  I started ‘Agent 21’ last night and read it in one evening.  It’s not a particularly long book but it was so thrilling that I couldn’t put it down.


The formula is pretty similar to other books in this genre, however unlike some series which do start to get a little far-fetched (fast cars and multiple gadgets), the story was realistic enough to believe that it could actually happen.  Zac Darke is recruited by a shadowy government organisation after the death and suspected murder of his parents.  He’s trained to become a teenage spy and then sent on a mission to infiltrate and capture a notorious drug lord in Mexico.  Along the way he has to use all the skills he’s been taught and survive on his wits and guile alone to avoid detection.

I loved this book!  It was fast-paced and exciting and a thrill-ride from start to finish.  The storyline is pretty simple but well executed.  Chris Ryan has plenty of experience in learning how to survive from his time in the SAS and therefore situations felt authentic and believable.  I really liked Zac who makes a likeable hero.  He’s intelligent and brave and clever and I enjoyed following his progression from normal teenager to fully-fledged spy.  He has to make difficult choices and learn when everything isn't as black and white as it might first appear to be.

There are plenty of books about boy spys on the market but this one really stood out for me.  It's full of action-packed adventure, thrills and spills and although obviously targeted at male readers would appeal to anyone looking for a great read.
The ending sets things up nicely for the sequel, although I’m hoping that there are going to be plenty more Agent 21 books to come!
Posted by Samantha (A Dream of Books) at 11:18