The Queen's Lady by Eve Edwards, published by Puffin on 3rd February 2011

Goodreads synopsis:
1584 – Surrey, England When Lady Jane Rievaulx begins service to the Queen at Richmond Palace, she is thrilled at the court’s newest arrival . . . Master James Lacey. Despite her previous courtship with his older brother, James is the man she truly loves. And for his part, he cannot deny his fascination with her. However, James is setting sail on a treacherous journey to the Americas, seeking absolution for what he sees as past sins. But when Lady Jane is forced into a terrible situation by her own family, there is only one man to save her. Will Master James return to his lady ­- before it’s too late? 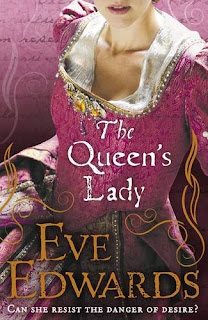 The story focuses on Lady Jane Rievaulx, who is now a lady-in-waiting to Queen Elizabeth.  She was first introduced as a peripheral character in 'The Other Countess (read my review), but here gets to take centre stage.  She believes that she may at last have found some small comfort and security in the Queen's court, until she finds herself being coerced and blackmailed by her family into an unwanted marriage.  Her heart however lies elsewhere but she may not be free to follow her true desire.

Also reappearing from the first novel is the Lacey brothers - Will and James.  Will has now settled down and is happily married but his younger brother, James, is haunted by his recent experiences in the Low Countries.  To try and recover his spirits, he is about to set sail on a journey to the Americas but he leaves his heart behind with Jane who needs him more than ever.  I loved the relationship between these two characters.  They're both only eighteen years old but they've each experienced a lot in their short lifetimes and are living in a period when people were getting married and having children at a much younger age.  The scenes in the book that they share were definitely among my favourite passages.  They may get off on the wrong foot but when misunderstandings are put aside they fall madly in love and are perfect for each other!

Set in 1583, attention is paid to recreating the sights, sounds and smells of Tudor England.  I felt transported back to an entirely different age.  The story illustrates the precarious situation which was faced by many women at the time who were not free to choose their own paths and had little independence or rights of their own.  Jane's friend Milly is seen trying to carve out her own business but this is shown to be a difficult endeavour at times for a single woman.  Milly also shares a close friendship with James's servant Diego and here the book sensitively handles the relationship between a white English woman and a dark-skinned foreigner.  Racial discrimination is rife and not everyone is accepting of the match.

Some familiar faces reappear from 'The Other Countess' such as Will and Ellie and it was good to pick up their story briefly again and see how things have turned out from them.  You don't necessarily need to have read the first book before this one but I would recommend you do for the sheer pleasure and enjoyment they provide.

Eve Edwards has turned me into a huge fan and you can bet I'm going to be picking her books up to re-read them at some point soon.  I thought that the first book was absolutely brilliant but I think she may have outdone herself with the sequel.

'The Rogue's Princess', which is the next installment in the series, is due to be published in the UK in July 2011.  Here's a peak at the gorgeous cover from Eve Edwards website.  You'll definitely want this one on your bookshelf! 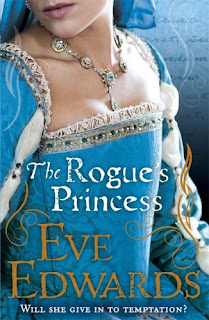 Thanks to the publisher for sending 'The Queen's Lady for review.
Posted by Samantha (A Dream of Books) at 11:00