Reckoning by Kate Cary, published by Egmont on 7th February 2011

Goodreads synopsis:
This is the original vampire romance: go back to where the bloodlust began! Mary Seward thought she had escaped the darkness of Transylvania. But now, back in England, she has terrible nightmares, fears the darkness, and sees vampires everywhere. When a strange virus weakens her father, Mary suspects that there's a far more sinister force at work. Then Mary's worst nightmare comes true: Quincey Harker, heir to Dracula's bloodline, appears in England. He declares his eternal love for her and claims he has renounced his evil heritage. But is he telling the truth? Can his lust for blood be so easily forsaken? The first temptation is never the strongest... 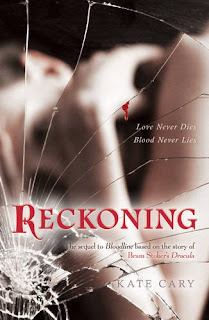 Review:
'Reckoning' is the sequel to 'Bloodline' which I read last month (read my review).  It picks up from the events of the previous book and revisits the characters of Mary Seward and Quincey Harker - the latter who was supposed to be responsible for ensuring the Dracula bloodline did not die out.

I found the story utterly gripping.  I read it in one evening because once I'd picked it up I couldn't bring myself to put it down until I'd followed the story to its conclusion.  I would definitely recommend that you don't start this too late in the day in case you're up all night reading!

If you haven't read 'Bloodline' then I would suggest going out and getting a copy and reading it first.  'Reckoning' does begin with a short recap of events which helped to refresh my memory about previous occurrences and events but I think you do need to have read  the first book to fully understand and comprehend all the characters and their motivations.

The story is alternatively told through the eyes of Mary and Quincey.  This narrative device works well and helps to establish the true feelings and emotions of the characters.  It also provided different viewpoints of events which are key to the plot.  Quincey Harker is now supposedly a reformed character but the question is - can Mary really trust him!  I liked the fact that more of Quincey's back story was established, including how he became completely vampiric.  The only problem I had was that knowing everything about him, I'm not sure if I totally bought into his later transformation.  Can someone really change their outlook so radically?

I guessed one of the twists in the story quite early on but I was also completely taken by surprise by one of the latter events of the book.  I didn't see it coming at all so that made it very exciting.  I love the way in which everything isn't always black and white/ good or bad and you really have to think carefully about the motives of the characters and whether they can be trusted.

Overall the book was fast paced, gripping and a real page turner.  I liked the way in which Kate Cary turned the events of 'Bloodline' on their head and has constructed her own version of Dracula.  I'm guessing from the conclusion of the story that a third book is also planned as certain things were still left hanging.  I would also hope to see more of John at some point and find out what's happened to him since his life-changing experiences in Transylvania.

Thanks to the publisher for sending this one for review
Posted by Samantha (A Dream of Books) at 11:43