Love, Lies and Lizzie by Rosie Rushton, published by Piccadilly Press in 2009

Goodreads synopsis:
What would happen if Jane Austen's Pride and Prejudice was set in the twenty-first century? When Mrs Bennet inherits enough money to move to the kind of village she has always dreamed of, her daughters find themselves swept up in a glamourous life of partying and countryside pursuits. But Lizzie and her sisters soon discover that, beneath the very smart surface, lurks a web of intrigue and rivalries... 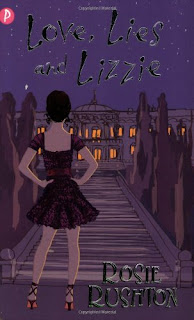 Review:
I haven't read anything by Rosie Rushton before but I picked this one up in the library because a) the cover is really pretty and b) it's described as a moder-spin on 'Pride and Prejudice' and as my other passion besides YA is 19th century literature, that definitely sounded like the sort of book I'd enjoy.  I'm pleased to say that I absolutely loved it and I'm going to make a point now of searching out some of Rosie Rushton's other books.  She's apparantly written several novels in the 'Jane Austen in the 21st Century' series so I'm excited to get my hands on the rest!  'Northanger Abbey', 'Sense and Sensibility', 'Emma' and my personal favourite 'Persuasion' have all been given the Rushton treatment.

The story draws inspiration from 'Pride and Prejudice' but brings the literary classic up-to-date for a modern, teen audience.  One of the things I enjoyed the most about it was identifying all of the similarities and differences between the characters and who they're all supposed to be based on.  For example, Lizzie is now a young teenage girl who near the end of the book goes on a work placement to France to help out at a music therapy centre, unlike in the original where Elizabeth is on a touring holiday with her Aunt and Uncle.  Mrs Bennet is still a screeching social climber who wants the whole family to take their rightful place in the world among the upper echelons of society.  Jane is still the good, kind and considerate sister, while Lydia remains the livewire who becomes embroiled with George Wickham, the dastardly villain of the book.  They're all still looking for love but doing it the modern way now with emails, texts and phone calls.  No old-fashioned courting here then!

It's a credit to Rushton that she manages to make James Darcy as gorgeous, strong and silent and just as much a dark horse as the original Mr Darcy.  A difficult thing to do considering the latter is beloved by females around the world.  I was definitely rooting for him and Lizzie to hurry up and realise that they're perfect for each other.  I will also admit that I had a Darcy sized crush on him throughout and loved all the scenes building up to their romance.

When a classic is as beloved as 'Pride and Prejudice' I imagine it must be a daunting task trying to do justice to it and yet craft something new at the same time, but Rushton's got it spot on!  Her take is fresh and modern and will appeal not only to Austen fans but also to those who like a good romance with a strong hero and heroine.  'Love, Lies and Lizzie' most definitely charmed me!
Posted by Samantha (A Dream of Books) at 00:00