Review: In the Bag - Jim Carrington

In the Bag by Jim Carrington, published by Bloomsbury on 7th February 2011

Amazon synopsis:
Joe and Ash are best friends. Ash is the leader, Joe the one who follows. Then one night after a party, Joe and Ash come across a holdall, seemingly abandoned by the side of the road. They open it up ...and find GBP20,000 in cash. Of course they're going to hand it straight to the police. Aren't they? Or is all that money just too tempting? Whoever has lost it won't notice if a bit goes missing, will they? And that is precisely when the trouble starts ... 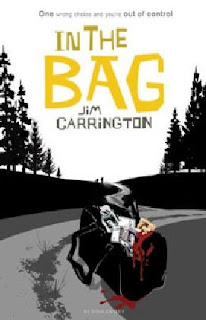 Review:
﻿'In the Bag' is about two boys, Joe and Ash, who stumble across a bag filled with money and decide that they're going to keep it.  This sets in motion a sequence of events that cause them to think seriously about the consequences of their actions and the split-second decision they made.  The boys and the reader are left to consider what would have happened if they'd never taken the money in the first place or handed it into the police and come clean straight away about what they'd done.
The story takes place over a period of a week and the chapters alternate between the viewpoints of Joe and Ash, depicting the feelings of euphoria and guilt that they both suffer.  Jim Carrington has managed to capture the language and emotions of the two teenagers - although a quick warning that there is quite a lot of strong language used.  He also shows them drinking and taking drugs, so there's a gritty and realistic feel to the story and the characters.  I felt like I was really seeing things through their eyes and sharing in their experiences.
As the story progressed and the action sped up, it got very tense.  I wasn't sure how things were going to play out and although I suspected from the start that Joe and Ash weren't going to get away with keeping all the money without repercussion, I was still surprised at some of the twists and turns near the end of the book.  I would have liked the ending to have actually carried on beyond the rather abrupt finish though.  I felt like I wanted to know a bit more about what happened and how everything was explained.
Although this is not normally the sort of book I would have picked up I still thought that it was very well written and the story was tense and exciting.  I think it would probably appeal particularly to male readers.  I'm definitely also going to check out Jim Carrington's first book 'Inside My Head' which I've read good reviews of.
Thanks to the publisher for sending this one for review.
Posted by Samantha (A Dream of Books) at 11:55