Review: Before We Fall - Courtney Cole

Before We Fall by Courtney Cole, published by Hodder on 4th November 2014

Goodreads synopsis:
Sometimes, one dark moment is all it takes to turn your world black...For 24-year old Dominic Kinkaide, that moment took place on the night of his high school graduation. One dark incident changed him forever. He's a hardened actor now, famous in the eyes of the world, but tortured in his own. He doesn't care about much of anything, except for losing himself in the roles that he plays.

23-year old Jacey Vincent doesn't realize how much her father's indifference has affected her. She is proof that sometimes it isn't one specific moment that wrecks a person, but rather it's an absence of moments. She's like a bird with a broken wing-strong yet fragile, as she tries to float through life, finding acceptance in the arms of random guys, one after the other... to fill the void that her father left in her.

Until she meets Dominic. 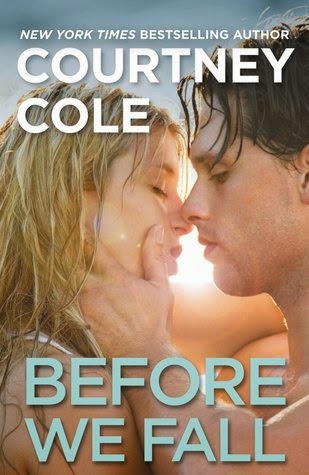 Review:
This is the third book in the Beautifully Broken series by Courtney Cole.  I've enjoyed both of the previous two titles in the series but I wasn't sure about this one because it focuses on Gabe's sister Jacey who I wasn't a big fan of previously.  However she really did win me over.  I came to see that yes, she had made a lot of mistakes in the past but she was strong enough to realise that and to make a conscious decision to try and put her life back on track and build a better future.  She learnt to respect herself and to not take any crap from anyone else.

As Jacey is trying to turn her life around, handsome actor Dominic Kinkaide is still haunted by a traumatic event in his past.  Although he may be broken inside, Jacey could be just the one to put him back together again.  I love Courtney Cole's characters.  They are not perfect but that makes them much more real and human.  They slip up a lot and sometimes I didn't like the decisions they made, but they always keep on going and that is an admirable quality to have.

Sexy Dominic wasn't necessarily my kind of guy in the beginning but he opens up a lot as the story progresses and I came to see quite a different side to him.  Some of his lifestyle choices are questionable but when you begin to find out more about him, I began to see why he had closed parts of himself off.

'Before We Fall' turned out to be another great instalment in what is a thoroughly enjoyable series about men and women finding love against the odds.  Although it wasn't my favourite, I still found it a great read and I loved hearing titbits about Gabe and co.

I would love to read a book about Gabe and Jacey's friend Brandt in the future.  He is definitely boyfriend material!