Heir of Fire by Sarah J Maas, published by Bloomsbury on 11th September 2014

Goodreads synopsis:
Lost and broken, Celaena Sardothien’s only thought is to avenge the savage death of her dearest friend: as the King of Adarlan’s Assassin, she is bound to serve this tyrant, but he will pay for what he did. Any hope Celaena has of destroying the king lies in answers to be found in Wendlyn. Sacrificing his future, Chaol, the Captain of the King’s Guard, has sent Celaena there to protect her, but her darkest demons lay in that same place. If she can overcome them, she will be Adarlan’s biggest threat – and his own toughest enemy.

While Celaena learns of her true destiny, and the eyes of Erilea are on Wendlyn, a brutal and beastly force is preparing to take to the skies. Will Celaena find the strength not only to win her own battles, but to fight a war that could pit her loyalties to her own people against those she has grown to love? 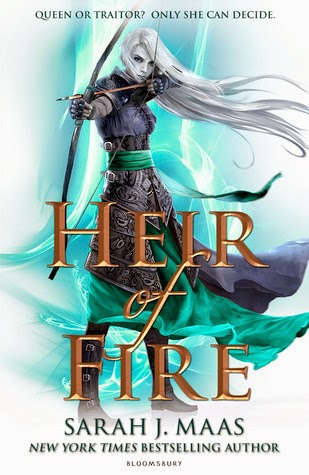 Review:
As a Christmas treat to myself, I managed to avoid reading this a few months ago when it was first published and I saved it to read when I was on my Christmas break.  To do that, I had to bury it under a pile of other books so that I wouldn't be tempted to delve into it immediately.  Boy, was that hard!  This meant that I could sit reading it for as long as I liked without any interruptions.  And what a stellar book it was!  This is shaping up to be one of my favourite YA series of all time.

The story got off to a slow start but not in a bad way.  It gave me a chance to remember all the things that had happened in 'Crown of Fire' and to become reacquainted with lots of familiar and well loved faces.  Although it was very strange not to see Celaena, Dorian and Chaol all together and I did really miss that, it was also interesting to see them forging their own paths and having to stand alone.  All of them have their own demons to face before they can get a happy ending.

I really, really missed the romance between Celaena and Chaol and I'm still hopeful that they will get back on track in the next book.  I'm firmly of the opinion that they make each other a better person and that their best qualities definitely compliment each other.  All the best romances have to overcome adversity first!

Celaena is an incredible hero.  She is self-less, determined, brave and unbroken and I've enjoyed joining her on every step of her journey towards redemption and self-discovery.  There are lots of new sides to her character in this book and I like the fact that there are so many different aspects of her personality still to explore.

As well as all my favourites there were some great new characters added to the story.  Rowan was amazing and I loved learning all about him but I also enjoyed seeing Sorscha the healer and Manon the witch.  Be prepared for plenty of surprises when it comes to these guys.

This is the kind of book that you can get lost in and wish that you'll never have to find your way out of again.  Brilliantly written, Sarah J Maas has a lifelong fan in me (and I'm sure other readers too!)