Becca Fitzpatrick has stopped by A Dream of Books today to provide some advice for teens.

On being a teen or advice for teens

In my writing I tend to draw, at least in bits and pieces, on my own teen years. In Dangerous Lies I based Chet Falconer, the story's hero, on my high school boyfriend. I had a great high school boyfriend. He was kind, smart, athletic, good looking. At the time, I wondered why he was with me. Girls would come up to me at school and say things like, “Is he really with you?” and it made me more insecure. I think teens can be really hard on themselves. We're very critical of every perceived flaw. Recently, a friend from high school contacted me and said, “You had everything. I wanted to be you.” I was baffled.

Moral of the story: Love yourself. Be kind to yourself. Focus on your good qualities, because someone out there sees them.

Becca's new book 'Dangerous Lies' (published by Simon and Schuster) is out now.

But Stella was about to start her senior year with the boyfriend she loves. How can she be pulled away from the only life she knows and expected to start a new one in Nebraska? Stella chafes at her protection and is rude to everyone she meets. She’s not planning on staying long, so why be friendly? Then she meets Chet Falconer and it becomes harder to keep her guard up, even as her guilt about having to lie to him grows.  As Stella starts to feel safer, the real threat to her life increases—because her enemies are actually closer than she thinks. 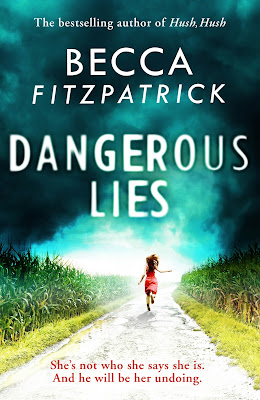 Don't forget to check out the rest of the stops on the 'Dangerous Lies' blog tour. There are some great posts still to look forward to.