Review: The Vanishing Throne - Elizabeth May

The Vanishing Throne by Elizabeth May, published by Gollancz on 19th November 2015

Goodreads synopsis:
Aileana took a stand against the Wild Hunt, and she lost everything: her home, her family and her friends. Held captive by her enemy, and tormenting herself over her failure, escape seems like only the faintest possibility. But when she gets her chance, she seizes it . . . to rejoin a world devastated by war.

The future is bleak. Hunted by the fae, running for her life, Aileana has only a few options left. Trying to become part of a society scarred by – and hiding from – the Wild Hunt; trusting that a fragile alliance with the fae will save her; or walking the most dangerous path at all: coming in to her own powers as the last of the Falconers . . . 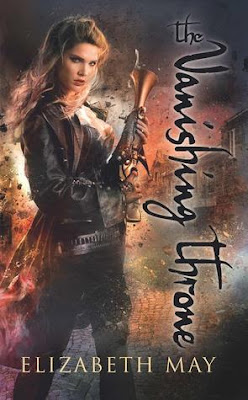 Review:
This is the book that I had been waiting all year to read.  The sequel to the phenomenal 'The Falconer' which was an absolutely five star read, I was over the moon to finally get my hands on a copy and I wouldn't wait to see what lay in store for Alieana and her friends next.  Plus, look at that awesome cover!  Who wouldn't want to pick this book up and dive straight in?!

After the events of the previous book, Alieana is seen at the beginning of the story in the hands of her enemy, Lonnrach.  The opening chapter plunged me straight back into Alieana's world, where everything is at stake and the fight for survival is all that matters.  There is a lot to absorb at the start of the story and I had to remind myself about what had happened previously but it didn't take me long to catch-up with the main plot points.

One of the things I love about the series is Elizabeth May's characterisations.  Alieana is a truly brilliant heroine.  She is brave, determined, stubborn and a true fighter.  You know that she will never give up.  I really liked the relationship between her and Kiaran in 'The Falconer' and I was excited to see that develop further.  I am also Derrick the pixie's number one fan.  I loved the scenes with him and these are among my favourite in the book.  I thought that the introduction of Kiaran's sister Aithinne was also fantastic, as she is so interesting and intriguing with lots of hidden sides.

More is revealed about Alieana's enemies' true purpose and about Kiaran's past.  The ending left me on the edge of my seat and it's going to be a long and unbearable wait until the next book in the series.

Exciting, fast-paced and compulsive reading.  Utterly impossible to put down, this is one of the best books I've read in the past year.