Goodreads synopsis:
1942. The fate of the world rests on a knife’s edge. And the soldiers who can tip the balance . . . are girls.

Set in an alternate World War II where young women are called up to fight alongside men, this is the story of Rio Richlin and her friends as they go into battle against Hitler’s forces.

But not everyone believes that they should be on the front lines. Now Rio and her friends must fight not only to survive, but to prove their courage and ingenuity. Because the fate of the world is in the hands of the soldier girls. 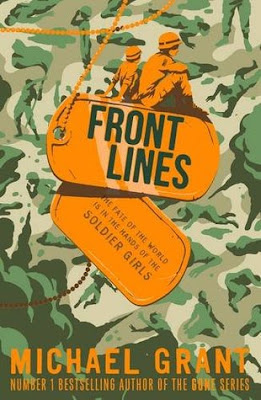 Review:
'Front Lines' has such an innovative storyline.  Michael Grant has imagined an alternative history where girls enlisted and fought on the front line during World War Two.  Joining their male counterparts, they protect their country against attack.  Uniquely different, this made for a plot which piqued my interest as soon as I read it.  I couldn't wait to see how Grant's spin was going to unravel.
Set in 1942, the story follows three girls as they go to war.  We initially see them at home with their families, understanding their motives for enlisting, before following them through rigorous training and all the way to the front line.  They have a lot to contend with along the way as they try to prove their worth.
I enjoyed 'Front Lines' and I think YA readers will too.  Although the subject matter might initially seem male orientated, because the central characters are all girls, I think this will appeal equally to female readers.  If you are a history buff then you need to get your hands on this title which provides such a unique and different spin on events.  Who would ever have thought of imagining girls as soldiers?  Michael Grant, that's who.
I still haven't found any of his books quite as gripping and addictive as the Gone series, but this is still a great read and as the first in a new trilogy, it will be interesting to see what is in store for readers next.
﻿
Posted by Samantha (A Dream of Books) at 00:00