Review: How Not To Disappear - Clare Furniss

How Not To Disappear by Clare Furniss, published by Simon and Schuster on 28th January 2016

Goodreads synopsis:
Hattie's summer isn't going as planned. Her two best friends have abandoned her: Reuben has run off to Europe to 'find himself" and Kat is in Edinburgh with her new girlfriend. Meanwhile Hattie is stuck babysitting her twin siblings and dealing with endless drama around her mum's wedding. Oh, and she's also just discovered that she's pregnant with Reuben's baby…Then Gloria, Hattie's great-aunt who no one even knew existed, comes crashing into her life. Gloria's fiercely independent, rather too fond of a gin sling and is in the early stages of dementia. Together the two of them set out on a road trip of self-discovery - Gloria to finally confront the secrets of her past before they are erased from her memory forever and Hattie to face the hard choices that will determine her future… 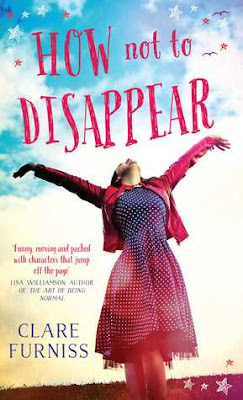 Review:
This is the second book by Clare Furniss, after the success of her debut 'The Year of the Rat'. It deals with difficult and emotive subjects but doesn't shy away from painting the realities of life, however hard they may be.

There are two perspectives and stories in the book which intertwine.  Teenager Hattie, who finds herself pregnant at the very beginning and her great-aunt Gloria.  As Gloria recollects her past and a dark secret she has always kept, her memories help Hattie to move forwards with her future.  I thought that the two central characters complimented each other well and it was interesting hearing about Gloria's life in the 1950's, as well as Hattie's in the present day.  Both women were written equally well.  I don't always find I enjoy stories with multiple narrators but this was easy to follow and both had captivating storylines.

The plot surrounding Gloria was actually much sadder than I was expecting.  I found it upsetting at times but I thought that it dealt honestly and truthfully with the subject of dementia.  This is something that I haven't seen a lot of in books, especially those in the YA genre.  It's a terrible thing to happen to someone but it was dealt with very sensitively.

'How Not To Disappear' is a very good second novel by Clare Furniss, which is sure to do as well as, if not better, than her debut.