13 Minutes by Sarah Pinborough, published by Orion on 18th February 2016

Goodreads synopsis:
I was dead for 13 minutes.

I don't remember how I ended up in the icy water but I do know this - it wasn't an accident and I wasn't suicidal.

They say you should keep your friends close and your enemies closer, but when you're a teenage girl, it's hard to tell them apart. My friends love me, I'm sure of it. But that doesn't mean they didn't try to kill me. Does it? 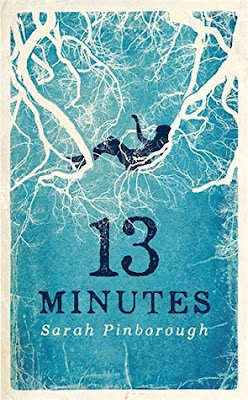 Review:
'13 Minutes’ by Sarah Pinborough is a dark and captivating tale, inspired by a true life event. I picked it up with the intention of reading a few chapters and ended up finishing the whole book in one sitting. The plot is gripping and the various twists and turns throughout the story ensured that I was constantly kept on my toes. The killer twist near the end was absolutely brilliant and made me want to turn back to the first page and read everything again but in a new light.

The story highlights the fraught teenage friendships that are formed in high school, the power of the Queen Bee and the changing dynamics of female friends. Who’s in and who’s out is all important. With echoes of ‘Pretty Little Liars’, the book centres around a pivotal event which unfolds right at the start of the story. The near drowning of Natasha who is found just in time to prevent disaster, but who was technically dead for 13 minutes, is the mystery that gradually unravels. With no memory of what happened leading up to the event, did she slip or was she pushed? And who would have wanted to cause her harm?

Much of the story that follows is told by her former best friend Becca. Pushed aside by Tasha when she formed a friendship with two other girls, Becca is gradually drawn back into Tasha’s circle by a series of circumstances. The dynamic between the two girls is interesting and well written. I liked the chess analogy and the way that you are never quite sure if they really are friends or adversaries.

I enjoyed the structure of the book itself, and the way that the characters have to work backwards to make sense of what really happened. The addition of notes from Tasha’s journal and the case notes of the Detective on her case, also added an extra layer to the narrative.

There are some jaw dropping moments in the book and a dark edge to the plot. It reminded me a little of ‘Suicide Notes of Beautiful Girls’ by Lynn Weingarten, but although it had similarities, it was still a unique and original read.

Pick this one up if you are looking for a gritty, captivating suspense tale about the dangers of trusting your friends too much.