The Incredible Adventures of Cinnamon Girl by Melissa Keil, published by Stripes Publishing on 11th February 2016

Goodreads synopsis:
Alba loves her life just as it is. She loves living behind the bakery, and waking up in a cloud of sugar and cinnamon. She loves drawing comics and watching bad TV with her friends.

The only problem is she’s overlooked a few teeny details:

Like, the guy she thought long gone has unexpectedly reappeared.
And the boy who has been her best friend since forever has suddenly gone off the rails.
And even her latest comic-book creation is misbehaving.

Also, the world might be ending – which is proving to be awkward.

As Doomsday enthusiasts flock to idyllic Eden Valley, Alba’s life is thrown into chaos. Whatever happens next, it’s the end of the world as she knows it. But when it comes to figuring out her heart, Armageddon might turn out to be the least of her problems. 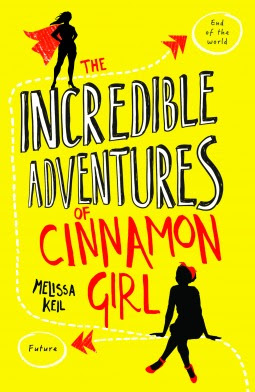 Review:
‘The Incredible Adventures of Cinnamon Girl’ is written by Aussie author Melissa Keil.  It’s the first of her books I’ve read but it won’t be the last!   The title alone was enough to pique my interest, although I wasn’t initially sold on the blurb.  I did have my doubts that it was going to be my kind of read but I was very pleasantly surprised.  There was a real warmth to the characters that I wasn’t expecting which drew me in and made me care about what happened to them.

The story is set at the start of the summer and is based around the central character of Alba, a budding graphic artist and comic book fan.  She is genuinely happy with her life, which was actually refreshing to see.  She loves her home town of Eden Valley, she loves living behind her mother’s bakery, she has a great group of friends and adores her best friend Grady who she has known since childhood.  What could she possibly have to deal with?  The story focuses on what happens when you have everything you think you want and are afraid to take the next step because it might never be as perfect as it is in that moment.  Alba has to face making big decisions about her future without knowing if they are the right ones to make.  Should she stay in Eden Valley or leave and go to university?  Will Grady always be her best friend or is there more between them?  These are questions that will be familiar to most teens.  I thought that Keil did well to make these issues in the book so realistic and easy to identify with.

There is a humorous steak throughout which made me laugh and smile as I was reading.  The idea that Eden Valley is the only safe place when the end of the world comes, was somewhat strange but actually worked well with the overall themes of the story.  You don’t always know what is around the corner so you should live life to the full and enjoy every moment you have.

My absolute favourite thing about this book was the friendship between Alba and Grady.  It’s easy, it’s comfortable and it’s the kind of best-friend bond that I would have loved to have had with someone growing up.  These two practically live in each other’s pockets and have supported each other through thick and thin.  Their friendship has taken a different direction by the end of the book but this works so well and was a joy to see develop.

This is a contemporary YA novel that you won’t want to miss.  Grab it now and bump it straight to the top of your TBR pile.