Review: The Warrior in the Mist - Ruth Eastham

The Warrior in the Mist by Ruth Eastham, published by Shrine Bell on 24th August 2017

Goodreads synopsis:
Aidan's village is under siege. A fracking company has moved on to the land.
Once drilling is complete, the paddocks looked after by Aidan's family will be gone, along with his home and the horse he loves.

Aidan and his best friends Emmi and Jon have one last hope. Legend has it that the warrior queen Boudicca is buried close by. If only they can find the tomb... prove this is the site of her last great battle against Roman invaders...

As the mists of time separating ancient history from present day swirl and fade, Aidan must face a deadly enemy. He must fight to uncover the truth of the ghostly sisters, before it is too late. 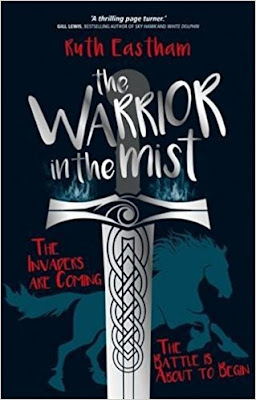 Review:
I've previously read 'The Memory Cage' by Ruth Eastham which was very good, so I was looking forward to starting 'The Warrior in the Mist'. The blurb sounded interesting and I also like supporting British authors.

The story is set in Carrus Village where a fracking company has moved onto the land.  Aidan and his friends are determined to try to stop them from destroying their homes.  The only way they can think to do this is to find the lost tomb of Queen Boudicca and her daughters which will win the land protected status.  Aidan, along with his friends Emmi and Jon are clever and capable teenagers who soon start connecting the dots and grow closer to the location of the hidden tomb.  However, someone wants to stop them from doing so.  I honestly didn't guess who the baddie was going to be, so it was a good surprise when it was revealed who was standing in their way and the lengths they were prepared to go to in their desire to stop the teenagers

I liked the theme of protecting the environment which ran throughout the story and the battle between the destruction versus the preservation of the land.  It's unusual to see something like this featured in a book for teenagers, so it was quite a refreshing change.  I actually think this book is probably more suited for middle-grade readers, rather than teens, due to the writing style and the fact that the characters are slightly younger.

I also enjoyed the historical aspects of the story but I wasn't as convinced by the supernatural parts dealing with the ghosts of Boudicca's daughters.  It just didn't entirely work for me.

A fairly quick and enjoyable read, I think it will appeal to the majority of readers.
Posted by Samantha (A Dream of Books) at 07:40