The Crow Garden by Alison Littlewood, published by Jo Fletcher on 5th October 2017

Goodreads synopsis:
Haunted by his father's suicide, Nathaniel Kerner walks away from the highly prestigious life of a consultant to become a mad-doctor. He takes up a position at Crakethorne Asylum, but the proprietor is more interested in phrenology and his growing collection of skulls than the patients' minds. Nathaniel's only interesting case is Mrs Victoria Harleston: her husband accuses her of hysteria and delusions - but she accuses him of hiding secrets far more terrible. Nathaniel is increasingly obsessed with Victoria, but when he has her mesmerised, there are unexpected results: Victoria starts hearing voices, the way she used to - her grandmother always claimed they came from beyond the grave - but it also unleashes her own powers of mesmerism ...and a desperate need to escape. Increasingly besotted, Nathaniel finds himself caught up in a world of seances and stage mesmerism in his bid to find Victoria and save her. But constantly hanging over him is this warning: that doctors are apt to catch the diseases with which they are surrounded - whether of the body or the mind. 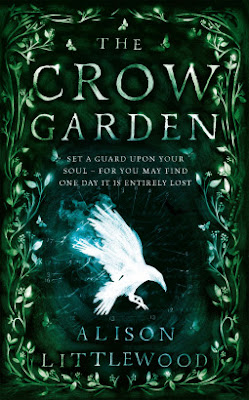 Review:
'The Crow Garden' was a really intriguing and enigmatic read.  Described as 'Susan Hill meets Wilkie Collins', I knew from that single line that I had to read this book.  I loved the Victorian meets Gothic meets psychological chiller atmosphere of the story and I found it a real page-turner and exactly my kind of story.

The setting immediately drew me in.  Crakethorn Asylum is creepy and atmospheric and almost makes you want to shiver.  It becomes the new place of employment of Doctor Nathaniel Kerr who has walked away from his prestigious consultant position, to work in a 'mad house'.  At Crakethorn, he meets Mrs Victoria Harleston, one of his new patients and becomes obsessed with understanding her and finding out her secrets.  This leads to a dangerous experiment in mesmerism which causes things to begin to unravel for the Doctor.

The book is divided into three parts, switching between Crakethorn, London and then back to the Asylum again.  I liked the three distinct sections and the way in which the story was perfectly balanced and kept me glued to the pages throughout.  It really did remind me of some of my favourite nineteenth century Gothic novels in terms of the plot and the storytelling.

I thought it was very clever how the author drew a veil of intrigue over many of the events in the novel.  I was never quite sure whether I could believe everything I read because it's unclear who still possesses control over their minds and who is being controlled.  Really puzzling to the reader but in a good way.

I haven't read anything by Alison Littlewood before but I was very impressed by 'The Crow Garden' and will be checking out some of her other novels now, as well as future offerings.
Posted by Samantha (A Dream of Books) at 00:00