Goodreads synopsis:
Luke is a prisoner, condemned for a murder he didn’t commit. Abi is a fugitive, desperate to free him before magic breaks his mind. But as the Jardines tighten their grip on a turbulent Britain, brother and sister face a fight greater than their own.

New alliances and old feuds will remake the nation, leaving Abi and Luke questioning everything – and everyone – they know. And as Silyen Jardine hungers for the forgotten Skill of the legendary Wonder King, the country’s darkest hour approaches. Freedom and knowledge both come at a cost. So who will pay the price?" 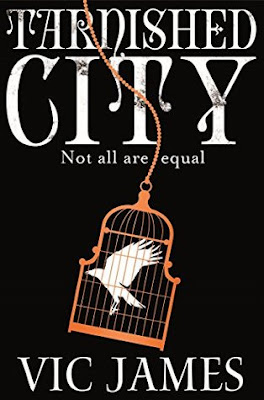 Review:
'Tarnished City' is the second book in the Dark Gifts trilogy.  You definitely need to have read the first instalment of the series because the story follows immediately on and just wouldn't make sense without already knowing about what has happened previously.  I loved the first book and had my fingers crossed that this one would be just as good.  While ultimately I don't think it turned out to be quite as absorbing as 'Gilded Cage', it was still hugely enjoyable.

The story begins with Abi determined to rescue her brother Luke, who has been condemned of a crime he did not commit.  Meanwhile, the Jardines are desperate for power over the country and a terrible fate for the people of Britain hangs in the balance.  There are some truly dark themes in this series and some parts of the story are pretty shocking.  I found that this just drew me even deeper into the lives of the characters and I was on the edge of my seat for a good part of the book.

I like the way that people in the series seem to be constantly changing.  Good and evil are interchangeable and this led to my feelings about various people in the story fluctuating throughout.  This was particularly true of the Jardine brothers who are incredibly difficult to read and often seemed to have an agenda of their own.  It's also true of the character of Dog who I initially felt sorry for but who I came to dislike immensely.

Whereas I loved the first half of the book which was really fast paced and gripping, I found the second half quite a bit slower and the action seemed to drag at times.  I think it suffered slightly from being the middle book in the series but I'm confident that Vic James will wrap everything up with a shocking finale when  'Bright Ruin' is published next year.
Posted by Samantha (A Dream of Books) at 00:00