The Crystal Maze Challenge by Neale Simpson, published by Headline on 17th October 2017

Goodreads synopsis:
Packed full of over 100 new games, mind benders and riddles, with this book you can now play the ultimate game show in the playground of your own home. Join ranks with family and friends as you travel through the four iconic zones - Aztec, Industrial, Future and Medieval - guided by Maze Master Richard Ayoade. Some games are quick, so you can have a spontaneous game if you fancy, whilst others require a bit more preparation but they can all be played with household items!

Test your skill, mental and physical abilities as you try to leap around your living room without touching the floor, solve puzzles and brainteasers, and complete treasure hunts around the house, all the while trying to win the crystals before heading to The Crystal Dome ... and remembering not to leave anyone locked in any cupboards! 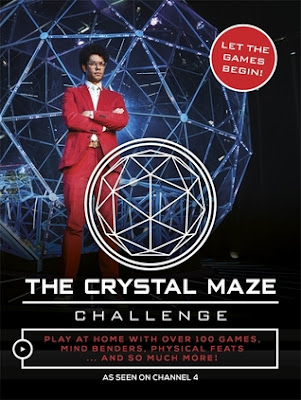 Review:
I love watching the Crystal Maze on TV so I thought that this book was going to be a brilliant and fun read.  My favourite parts of the book were some of the interviews that featured with the creators, the original Maze masterminds and the best quizmaster of all, Richard O'Brien.  I would have loved to have seen more of this.  It could have included features on the other quizmasters: Ed Tudor-Pole, Stephen Merchant and Richard Ayoade, as well as interviews with some of the contestants on the show.

The majority of the book contained features on how to recreate some of the many games which appear on the show, as well as how to set up your own Crystal Maze at home.  While a few of these would definitely be possible, others just seemed like they would take you forever to recreate, by which time I'm not sure you would have much excitement left to actually play the game.
Some Crystal Maze mad-fans might still enjoy this but I finished it feeling disappointed and ready to instead re-watch one of the classic episodes of the show which never fail to provide me with an hour of pure entertainment.
Posted by Samantha (A Dream of Books) at 00:00