Goodreads synopsis:
When fairy tale obsessed Lottie Pumpkin starts at the infamous Rosewood Hall, she is not expecting to share a room with the Crown Princess of Maradova, Ellie Wolf. Due to a series of lies and coincidences, 14-year-old Lottie finds herself pretending to be the princess so that Ellie can live a more normal teenage life.

Lottie is thrust into the real world of royalty - a world filled with secrets, intrigue and betrayal. She must do everything she can to help Ellie keep her secret, but with school, the looming Maradovian ball and the mysterious new boy Jamie, she'll soon discover that reality doesn't always have the happily ever after you'd expect... 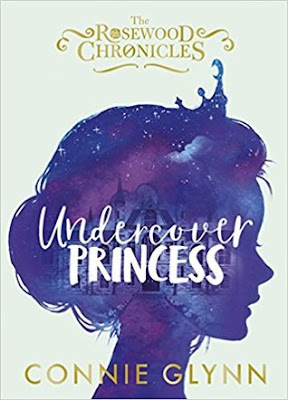 Review:
Before I started reading this book I had some trepidation about the fact that it was written by a Youtuber.  I'm not terribly familiar with Connie Glynn's videos but I curious to see if she could turn her talents to writing.  I loved the initial idea for the story and it ticked lots of my 'happy' boxes.  It was set at a boarding school, it featured a Princess and it had an utterly gorgeous cover.  I was excited before I'd even read the first page.

The story centres around teenager Lottie Pumpkin, who is starting her first year at Rosewood Hall, a boarding school that she has always dreamt of attending.  As a bursary student, Lottie worries that she might not be able to fit in with the other girls but she never could have imagined that the reason why they might treat her differently is because they think she is a the Crown Princess of Maradova.  Lottie's roommate Ellie, is the real Princess, a secret she agrees to keep hidden.  Lottie soon finds herself thrust into another world filled with danger, excitement and betrayal.

I thought that the two main characters were very well written and I loved the friendship which develops between Lottie and Ellie.  Although it gets off to a slightly shaky start, they become extremely close and I liked the way that they had each others backs and were willing to stand up for each other.  Their close friendship leads to a surprising twist which I won't reveal, except to say that it certainly added an interesting slant to the story.  Another character that I loved, was Jamie, who has quite a mysterious background but who we gradually get to know more about.  He added a nice touch of romance to the story, which I hope Connie builds on as the series progresses.

I mistakenly thought that this was a stand-alone but 'Undercover Princess' is actually the first in a series.  It's aimed at a YA audience but I tend to think that it's better suited to middle-grade because the characters are only fourteen which is a lot younger than most of the YA books I read.  There are a lot of big events which happen very quickly in the story and that also surprised me when I discovered that it was a series.  However, I think it was a great start, very enjoyable and with plenty of potential for book two.  I'm looking forward to seeing what happens to Lottie next.