Torn by Cat Clarke, published by Quercus on 22nd December 2011

Alice King isn’t expecting the holiday of a lifetime when she sets off with her classmates on a trip to the Scottish wilderness, but she’s not exactly prepared for an experience beyond her darkest nightmares…

Alice and her best friend Cass are stuck in a cabin with Polly, the social outcast, and Rae, the moody emo-girl. Then there’s Tara – queen of mean. Powerful, beautiful and cruel, she likes nothing better than putting people down.

Cass decides it’s time to teach Tara a lesson she’ll never forget. And so begins a series of events that will change the lives of these girls forever. 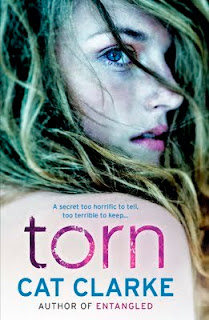 Review:
‘Torn’ by Cat Clarke is an amazing read, following hot on the heels of her successful 2010 debut ‘Entangled’. I was incredibly intrigued by the premise of this book which sounded a bit like Mean Girls but with a twist. I had a feeling that I wasn’t going to be disappointed and I proved myself right because I absolutely loved every second of reading ‘Torn’. I found it totally gripping from start to finish. What I really loved was the fact that you knew something terrible was going to happen but you didn’t know exactly what and that in itself was enough to get me reading long into the small hours of the night. I kept telling myself that I was just going to read one more chapter and then one more, but in the end I couldn’t stop until I’d reached the conclusion of the story.

Clarke’s writing is incredibly strong and powerful and this helped me to identify with all the characters, even those who I didn’t immediately find particularly likable. My favourite was definitely Alice who narrates the events of the book and who seems to carry the biggest burden of guilt around with her about the tragedy which occurs. As a reader, I felt a great sense of helplessness that I could only watch as she becomes involved in something which spirals out of her control. She’s not a bad person at all, but Clarke shows that even good people can sometimes stray off the right path and much of Alice’s story is about her trying to put things right and face up to her actions.  Her feelings and emotions are explored in detail throughout the book, as is the psychological impact of the event that takes place and I found myself empathising with her and the terrible decision she has to make.

There’s romance in ‘Torn’ as well, with Alice becoming involved with Jack, the brother of her former best-friend. The way their relationship was written was incredibly realistic and they made a great pairing. They didn’t instantly fall head over heels in love with each other and this made the way the romance developed between them much more true to life.

I thought the ending of the book was absolutely spot on and I can’t imagine a more perfect way of concluding the story.  It actually moved me to tears!  'Torn' manages to be shocking, moving and gripping all at once and provides both mystery, thrills and romance. Cat Clarke has made a true fan out of me and I shall be waiting with anticipation for whatever she decides to write next.
Posted by Samantha (A Dream of Books) at 00:00