Unleashed by Nancy Holder and Debbie Viguie, published by Doubleday on 8th December 2011

Goodreads synopsis:
When Katelyn starts at her new school. the only person she knows is the handsome and intriguing Trick Sokolov, an acquaintance of her grandfather. She's surprised when the popular Cordelia Fenner invites her home and when she meets Cordelia's hot cousin, she begins to think her new life might be ok after all.

Katelyn finds herself caught between three major werewolf clans who have been at war with each other for centuries - a war, it seems, that Katelyn is destined to end. 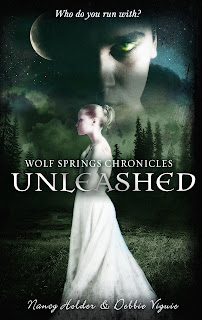 Review:
This is the first book in the Wolfsprings Chronicles by dynamic duo Nancy Holder and Debbie Viguie.  'Unleashed' is a fabulous paranormal tale of danger and romance set in a creepy forest where werewolves lurk around every corner.  Although there are a huge number of paranormal books on the market at the moment, 'Unleashed' managed to stand out for me because the plot is still incredibly unique and original and equal care is taken to building and developing both the story and the characters, making this a fast-paced and thrilling read.

The main character Katelyn, moves to the small town of Wolf Springs to live with her Grandfather after her mother dies in a fire.  Although she wants to stay in Los Angeles with all her friends because she's a minor she has little say in the matter and has to leave everything familiar to her behind.  She finds the change hard to adjust to and initially struggles to communicate with her gruff Grandfather but gradually begins to make new friends including gorgeous local guy Trick.  There's a hot love triangle in the book between Katelyn, Trick and Justin Fenner who she feels an irresistible attraction to every time they come face to face.  I loved some of the characteristics of both boys and could definitely see how Katelyn would feel torn between them.  I'm looking forward to seeing how her relationship with both of them develops in book two.

My favourite thing about 'Unleashed' was the way the plot and characters mirrored Shakespeare's 'King Lear', particularly when it came to Katelyn's new friend Cordelia Fenner and her extremely unusual family.  Cordelia has two sisters, Arial and Regan who frankly are not very nice at all.  She also has a difficult relationship with her father.  As I read on, I discovered that there was a lot more to the Fenner's than first meets the eye.  I'm a huge Shakespeare buff, so I thoroughly enjoyed identifying all the aspects of the play which have been incorporated into the story.  I thought this was really clever and an interesting way of meshing classic and modern literature together.

Although I had my suspicions about the way in which the story was going to play out, I often didn't have a clue what was going to happen next and found myself on the edge of my seat for large parts of the book.  The suspense is ramped up throughout as Katelyn is repeatedly warned not to go out after dark, a warning which is echoed by many others.  As a reader, you don't know yet what they're all afraid of and this led to a growing sense of tension and apprehension particularly when Katelyn ends up in the forest all on her own.

'Unleashed' is a really exciting start to a series which left me begging for more.  I can't wait to see what twists and turns are going to follow next.  There's still so much more to come!
Posted by Samantha (A Dream of Books) at 00:00