First Light by Samantha Summers, published on 28th May 2012

Goodreads synopsis:
Ronnie Rose is trying to cope with the loss of her father; now it looks like she might lose everything else that's dear to her too. Huge debts threaten to destroy her family, her childhood home and her future. Only one person cuts through her pain. Kalen Smith has just moved to town. He's trouble and everyone knows it. He and his mysterious friends keep to themselves and the town likes it that way. But when Kalen mourns at her dad's funeral, Ronnie wants to know why and her investigation plunges her into a dangerous world of murky government secrets, with deadly consequences. Ronnie knows she should walk away from Kalen before it's too late. Problem is, she's falling for him... 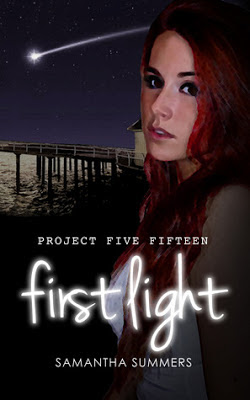 Review:
I don't review many self-published books but 'First Light', the opening book in the Project Five Fifteen series by author Samantha Summers is something special.  It exceeded all my expectations with an explosive plot, fast-paced action scenes and not one but five gorgeous boys thrown into the mix.

The story centres around teenager Ronnie whose father has just died.  Her older sister can just about look after herself and Ronnie is living all alone in her childhood home.  Trying to get her life back together, she's haunted by an event from her past and thrown by the mysterious boy who suddenly appears in her small town.

I really, really loved this book but I have to say that there were a few typos near the beginning and I found some of the initial dialogue between the characters a little stilted.  However, this didn't detract at all from my enjoyment and once the story began to kick up a notch, I was absolutely hooked and there was no looking back.  Each chapter just kept getting better and better and although I'd only planned to read for a short while, I didn't move from my chair all day.

Some of my very favourite series (such as Joss Stirling's books about the Benedict boys) feature a group of brothers and while Kalen and co may not be linked by blood, they are irretrievably linked together by their past experiences.  Laith is mysterious, Ace is so sweet and cute, Denver upbeat whatever the circumstances and Nash utterly dependable.  Then you've got Kalen whose romance with local girl Ronnie is at the heart of the story.  Believe me, you will lose your heart to these boys!

As I was reading 'First Light' I could definitely picture it as a television series.  I think the story would translate so well to the small screen.  I love the concept of Project Five Fifteen and I'm excited to see where Samantha Summers will take the plot next.  'As You Were', the second instalment, is out now and I'm dying to get my hands on it.  If like me, you don't often read self-published books then I would strongly urge you to make an exception for this very talented author.
Posted by Samantha (A Dream of Books) at 00:00