Drummer Girl by Bridget Tyler, published by Templar on 1st May 2013

Goodreads synopsis:
It was supposed to be the summer of her life. Instead, 17-year-old Lucy finds her best friend Harper shot dead in an LA swimming pool. How did it come to this? Lucy Gosling is the drummer in Crush, a rock band formed by five London schoolgirls that has just won the UK semi-final of an international talent contest. But when the band lands in Hollywood for the big final, things are not quite as they seem. The band's lead singer, Harper, has just one thing on her mind - using sex, drugs and rock and roll, not to mention Crush itself, to win back her bad-news ex-boyfriend. Lucy must decide whether she's playing to Harper's tune, or setting the rhythm for the rest of the band. 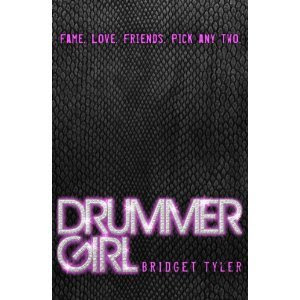 Review:
'Drummer Girl' author, Bridget Tyler, has written a fast-paced and enjoyable read about a group of girls who form a band and try to make it big in the spotlight of Los Angeles.  I enjoyed it a lot more than I originally thought and the ending leaves me hope that there might be a sequel somewhere down the line.

The story opens with the shocking death of Harper McKenzie, one of the members of the band.  This grabbed my attention immediately and left me guessing all the way through the book about who could have killed her.  It also meant that I was suspicious of everyone - even if they did seem really nice.  The action then jumps to 8 months earlier when we get to see the events leading up to her death.

The narrative is shared out between each of the girls in the band which I enjoyed because although they are on a journey to fame and fortune together, each girl has a different challenge to face and overcome.  My favourite characters were Lucy and Iza.  Lucy is the most central character in the book and the 'drummer girl' of the title.  She  tries to keep everything and everyone together while temptation is continually put in front of them.  She has however disobeyed her parents by going to LA against their wishes and faces a lot of pressure from different directions.  She is probably the most likable of all the girls and the most grounded but has boy problems to deal with too.

The book is about the reality of fame and fortune and shows all the behind the scenes goings-on that happen to the band.  It's not all fantastic parties and free clothes and there is a price to pay for everything.  It focuses on the dark underbelly of a life led in the spotlight and how this affects each of the girls.  'Drummer Girl' is perfect for fans of reality shows and the music world and I think will appeal enormously to today's generation of teens.
Posted by Samantha (A Dream of Books) at 06:03