Transcendence by C.J. Omololu, published by Bloomsbury on 21st May 2013

Nicole fears she's losing her mind. Lately, everywhere she goes, everything she touches, triggers vivid scenes of a time she doesn't know, in a place she's never lived. Then she loses her heart too . . .

When Griffon first sees Cole, he knows immediately that she is special, like him - that her visions are memories of past lives. And he is sure their paths were meant to cross in this life . . .

With Griffon's help, Cole pieces together clues from many lifetimes and discovers a secret that could ruin her only chance of a future with Griffon. But risking his love may be the only way to save them both. 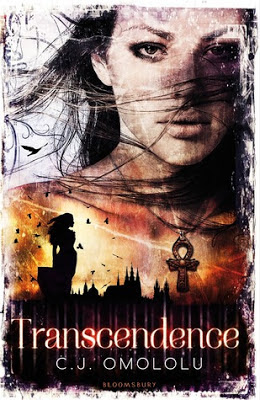 Review:
'Transcendence' was an interesting and enjoyable read which although took me a while to become fully immersed in, had plenty of twists and turns to keep me guessing along the way and had a really exciting ending.  It deals with the subject of reincarnation and shows what it would be like for someone to actually remember all the details of their past lives.

I found the story quite slow in the beginning and I wasn't quite sure what direction the plot was going to take.  The initial opening scenes take place at the Tower of London and set up the meeting between Nicole, known as Cole and Griffon.  They have an instant connection but the depth of this is only revealed later in the story.  At the start I wasn't took keen on the narrative constantly being interrupted by Cole's memories of the past.  It felt like this was too often breaking up the flow of the story and detracting from current events.  However, these did eventually become more seamless and began to make more sense in terms of their connection with the story.

I like the fact that Omololu allows the reader to experience what it would be like to remember your past lives.  You would be a different person but your grand-children or children might still be alive.  The story questions how you might cope with this and explores all the angles that reincarnation presents.  Although I've read books where the characters flash back to a life they have lived before, I've never seen this theme explored in quite the same way before.  C.J. Omololu has created a whole community of people who are like this and who call themselves Akhets.

The connection between Cole and Griffon is at the heart of the book.  Their romance develops gradually but is very sweet and mutually supportive.  A surprising secret about them is revealed later on in the book and this led to a thrilling finale which featured a pretty spectacular plot twist.

Although I felt like this would make quite a good stand-alone story, there is a sequel planned which is called 'Intuition' and published in the UK in 2014.
Posted by Samantha (A Dream of Books) at 00:00