Today I'm hosting a stop on the blog tour for Cat Patrick's new book 'The Originals'.  I have a great guest post from Cat herself to share with you. 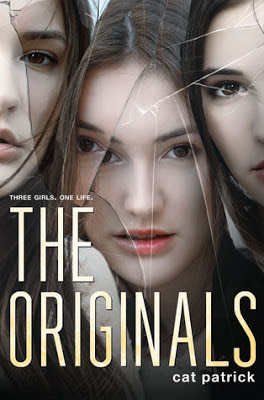 The top question I’ve been asked as an author is: “Where do you get your inspiration?” Unfortunately, there’s not an Inspiration Shop with a drive-up window, but the good news is that inspiration can be found everywhere. One of my favorite places to look is in weird science news. Doing that helped me with the ideas for my latest novel, The Originals—which is about the first human clones—as well as my second book, Revived, which is about a drug that brings you back from the dead. I love reading articles about scientific discoveries and pondering how they might shape themselves into stories.

So, in honor of the weird science in my novels, here are some real bits of news and corresponding fake story ideas:

Real News: My kiddos are obsessed with bats, and I love anything sensory related, so this research about determining whether blind people can use bat-like echolocation—tracking where objects are through echoes—appeals to me.

Fake Story Idea: I like a gal with supersonic hearing, don’t you? Full disclosure: I may have a first draft of a book about something along these lines, so it’s not truly fake.

Real News: How amazing is gene therapy, the ability to swap DNA to fix certain genetic issues when a baby is still in the womb?

Fake Story Idea: Well, there’s a lot you could do with the idea of designer babies. Or, what if the DNA gave the baby superpowers? What if the DNA was from a serial killer and made the baby bad?

Real News: I don’t have the world’s greatest recall, so I like the idea of these brain implants that could recover lost long term memories.

Fake Story Idea: London Lane from Forgotten returns after brain surgery with some of her lost memories of the past recovered…including some she’d rather forget!