Goodreads synopsis:
You can’t run from darkness. Eventually, the sun has to set.

Turning his back on the killer he was trained to be wasn’t as easy as Kalen Smith had hoped. They’d tried to run. They’d tried to hide. People had lost their lives. The wrong people. Now, driven by a thirst for revenge, Kalen and his team are preparing to take down those responsible.

But vengeance comes at a price and Ronnie can feel the boy she fell in love with slipping away from her, as the darkness he’s been running from for so long threatens to consume him.

With danger looming in every direction, the possibility of a happy-ever-after is looking bleak, but The Agency isn’t the only obstacle in the way of Ronnie and Kalen’s future. Ronnie’s harbouring a tragic secret that isn’t hers to keep and the truth could destroy not only their relationship, but what’s left of Kalen’s humanity.

One way or another, everything is about to change... 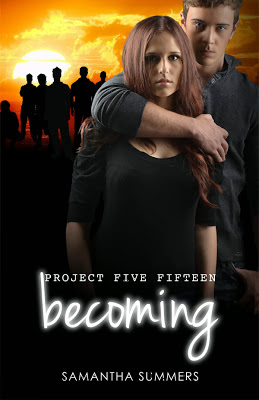 Review:
I don't know where to start with my review of 'Becoming' because I loved this book and indeed this series so much that I can't believe it's all over!  When the final instalment landed through my letterbox I was equally torn between shutting myself away to start reading it immediately (because I really couldn't wait to start it) and wanting to wait and prolong the enjoyment and anticipation.  In the end, my desire to find out how the story was going to conclude and what was going to happen to my very favourite book couple, Ronnie and Kalen, won out.  I read it in one evening and could not put it down.  Samantha Summers storytelling held me in the palm of it's hand and each chapter delivered so much that I was gripped and absorbed the whole way through.

It's no secret that I love the romance between Ronnie and Kalen.  What I love even more is the fact that there's no obligatory love triangle thrown into the mix just to shake things up between the two of them.  They've only ever had eyes for each other and although obstacles have frequently been put in their path, when it comes down to who their hearts belong to, there's no doubt that they are soul mates.  Although there wasn't quite as much romance in this instalment as I would have liked ('As You Were', the second book, delivered this in spades), I did enjoy the final twist that was thrown in and I thought it made the last few moments of the book even more special.  I'm trying desperately not to give away any spoilers but I do want to say that I thought the ending was mind-blowingly brilliant and was very true to all the characters and their stories.

Ronnie has taught Kalen so much about himself since they met.  I particularly liked some of the flashbacks in the book to when he first set eyes on her and how he couldn't get her out of his head, even when he tried desperately to forget about her.  They've always had an amazing connection and although at times Kalen has doubted whether or not they should be together because of the danger it puts Ronnie in, there has never been any doubt in my mind that they are a team and always work better together.

With Kalen and co plotting to take down The Agency once and for all, there are lots of new faces in the book as the other boys of Project Five Fifteen begin to surface. I loved seeing them all together and although they're not actually related by blood they are like a family and have each other's backs.  Ace is yet again utterly adorable and I really warmed to Denver who steps up and takes charge when needed.  There's definitely potential for a spin-off featuring some of the other characters or even a TV show! (I pictured Colton Haynes in my head when I was reading about Kalen).

'Becoming' was a superb read which delivered romance, adventure, action and excitement in spades!  I was absolutely engrossed in the story and found it compulsive reading.  I'm so sad that the series is over because I've become invested in the characters and their lives and I don't want the adventure to end.  I'm going to be re-reading the trilogy over and over again because I have so many favourite moments that I want to go back and relive.  Samantha Summers, I applaud you and I will read anything you turn your hand to next.  Thank you for giving me Ronnie and Kalen and thank you for writing such a wonderful series of books.
Posted by Samantha (A Dream of Books) at 00:00