Goodreads synopsis:
The Island is in peril. For years, bloodthirsty Marauder pirates have raided along the coast, carrying off goods and cattle. Now they're growing bolder, striking further inland, even taking slaves to man their black ships. An invasion is underway.

As the son of a wealthy Law, young Aran should be safe. The underground farmstead of Hawk's Cross lies miles from the sea, and even the killing winds that sweep down from the moors can't penetrate those solid steel gates. But Aran doesn't want to be safe, he wants to be a warrior: to fight for his friends, his family and his home.

Many tales have been told of the boy who became our greatest King. Very few have spoken of the future . . 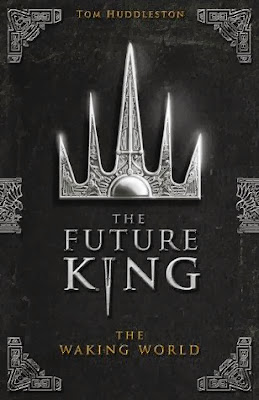 Review:
'The Waking World' is a futuristic Arthurian tale on an epic scale.  It's set in a future society which is completely unlike the one we know today.  The Earth has been ravaged by pollution and climate change and the people live as they did in the past, surviving off the land.  The story is set at Hawk's Cross, the home of Aran, the main character in the book.  He is one of the sons of a wealthy Law but the Island on which they live is under attack from the invading Marauders.  Aran is desperate to protect his home but also must discover the secret of his true heritage if he is to fulfil the destiny laid out for him.

I really liked the fresh take on the Arthurian legend of Arthur and Merlin.  It's one which so many people are familiar with but I thought that Tom Huddlestone still managed to bring something entirely new to the traditional tale.  At the start I wasn't sure how he was going to link everything together but bit by bit all the pieces started to fall into place.  It's an entirely different slant but it does work extremely well and the story is packed full of excitement and adventure.

One of my favourite aspects of the book was the friendship between Aran and his friends Cas and Mohanna.  They have grown up together and know each other inside and out and I liked seeing them look out for one another when they were in some dangerous situations.  I also loved the bond which develops between Aran and the mysterious Peregrine.  The latter was extremely intriguing and it was a delight to get to discover more about him throughout the course of the story.

I presume this is the first in a series as I finished it feeling like there was lots more to come.  I hope so because I enjoyed getting to explore Aran's world and I'm hoping to read more about him and his friends in the future.