Goodreads synopsis:
Celia Reynolds is the youngest in a set of triplets and the one with the least valuable power. Anne can see the future, and Jane can see the present, but all Celia can see is the past. And the past seems so insignificant - until Celia meets Lo. Lo doesn't know who she is. Or who she was. Once a human, she is now almost entirely a creature of the sea - a nymph, an ocean girl, a mermaid - all terms too pretty for the soul-less monster she knows she's becoming. Lo clings to shreds of her former self, fighting to remember her past, even as she's tempted to embrace her dark immortality.

When a handsome boy named Jude falls off a pier and into the ocean, Celia and Lo work together to rescue him from the waves. The two form a friendship, but soon they find themselves competing for Jude's affection. Lo wants more than that, though. According to the ocean girls, there's only one way for Lo to earn back her humanity. She must persuade a mortal to love her...and steal his soul. 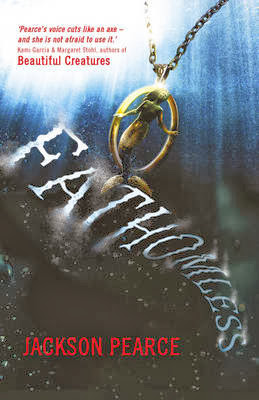 Review:
I loved Jackson Pearce's previous fairy-tale books, 'Sisters Red' and 'Sweetly' but I didn't think that 'Fathomless' held quite as much charm and magic.  I enjoyed it but it didn't leave me as enthralled as Pearce's other titles.  Based on 'The Little Mermaid' by Hans Christian Anderson, the book has been given her own unique spin but for me, veered a little too far from the traditional tale.

I really enjoyed the first half of the book, although I wasn't so keen on the direction it took at the end.  Although this tied it in with some of the other characters from Pearce's stories, it seemed out of keeping with the rest of the plot.

The story is jointly narrated by Celia and Lo.  Celia is one of triplet sisters, who has the special ability of being able to see into the past of the people she touches.  Although she abhors this, it proves to be vital to her friendship with Lo.  A creature of the sea, Lo lives in the ocean but struggles to leave her life as a human behind.  She desperately wants to remember the details of who she was and what happened to her family but the details have slipped away.  I really liked Lo who I thought was an interesting and multi-faceted character but I wasn't as keen on Celia.

Although there were quite a few elements of the book which didn't work for me and I would have liked there to have been more romance but not the obligatory love triangle, what I did love was the way in which Pearce captured the beauty and danger of the ocean.  I could sense the way that Lo felt at home in the waves and the power and majesty of her surroundings.

'Fathomless' didn't tick all my boxes but I'm still excited to read the fourth and final book in the series which is going to be based on The Snow Queen and will be called 'Cold Spell'.
Posted by Samantha (A Dream of Books) at 00:00