Review: How to Love - Katie Cotugno

How to Love by Katie Cotugno, published by Quercus on 3rd October 2013

Goodreads synopsis:
Reena has loved Sawyer LeGrande for as long as she can remember. But he’s never noticed her, until one day… he does. They fall in messy, complicated love. But then Sawyer disappears from their humid Florida town, leaving a devastated – and pregnant – Reena behind.

Three years later and there’s a new love in Reena’s life: her daughter Hannah. But just as swiftly and suddenly as he disappeared, Sawyer turns up again.  After everything that’s happened, can Reena really let herself love Sawyer again? 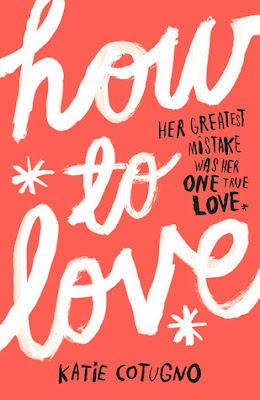 Review:
I finished reading this book a few weeks ago but I'm still trying to make up my mind about it.  There were some aspects which I enjoyed and there were others which I didn't understand at all.  I have very mixed feelings about the whole story and the characters so I'll try to explain my overall opinion of it.

The story is told within two time frames: Before and After.  Before Sawyer left Reena and After he walked back into her life.  Now, I'm personally not a huge fan of this particular narrative device.  It was interesting to see what happened between the two main characters in the very beginning but I found the constant switching backwards and forwards just left me feeling disorientated most of the time.  I also had to keep checking to make sure I knew which time period I was currently reading.  I definitely think this affected my overall enjoyment of the book.

In terms of the characters, I liked Reena who always tries to do the right thing but who feels she has let her family down.  I didn't however understand the attraction she feels for bad boy Sawyer LeGrande who she has been fascinated by for as long as she can remember.  She's intrigued by everything about him and doesn't have eyes for anyone else.  When he starts to date her best friend however, she has to try to put aside her feelings for him but that's easier said than done.  I have to say that I just didn't like Sawyer.  He only ever seems to hurt Reena and he came across as extremely selfish and self-centred.  I much preferred Aaron, the other male figure in the story who treats Reena with love and respect.  I know the book deals with showing the messy, real side of love and relationships but because I wasn't a fan of Sawyer, I found it hard to make myself care about whether or not he and Reena would end up together.

The story shows that there isn't always a happy ever after and that relationships have to be worked at if they are going to survive.  This is not the kind of book where everything is tied up with a neat bow at the end.  Although I wasn't always keen on the character portrayals I could still appreciate Katie Cotugno's writing and I  hope to see more titles by her in the future.
Posted by Samantha (A Dream of Books) at 00:00