Simple Perfection by Abbi Glines, published by Simon and Schuster on 3rd December 2013

Goodreads synopsis:
Woods had his perfect life mapped out for him. Rise up the ranks of the family business. Marry the rich girl of his parents’ dreams. Pretend that wealth and privilege was all he’d ever wanted. Then a girl named Della breezed into town, a beautifully imperfect stranger who captured his heart and opened his eyes to a new kind of future. Woods is ready and willing to sacrifice everything for her when the sudden death of his father leaves him with his mother to care for and a business to manage.

Della is determined to be strong for Woods, even as she’s quietly falling to pieces. No matter how far from home she’s run, the ghosts of her past have never stopped haunting her. Struggling to hide her true feelings from Woods, Della fears she can’t be his rock without dragging him down into the darkness with her. But is she strong enough to let go of the last thing holding her together? 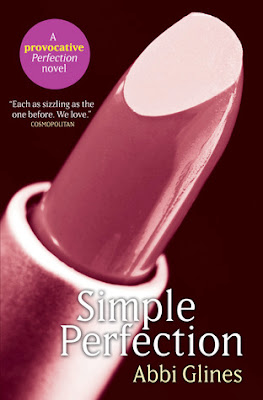 Review:
It's no secret that I love Abbi Glines so when this book arrived I dropped everything to start reading it immediately.  It continues the story of Della and Woods's romance which began in 'Twisted Perfection' and proved yet again to be an unputdownable read.  I love the Rosemary Beach gang and I enjoyed not only getting to see whether Della and Woods would finally achieve a happy ending but also seeing some of the other characters who we've been introduced to so far.

Della's personal story has often been pretty dark and twisty.  Her terrible childhood has left her with deep scars which she has been trying to overcome and with Woods she thinks she may have finally found her future.  But there are a few more hurdles to get over first.  Worried that she may not be the best thing for him, she takes drastic action, believing that she's doing what's right for him.  Della's story took quite an unexpected turn in the second half of the book which did come a little out of the blue but for me, proved to be the right conclusion for her.  Although she has never realised it, she's incredibly strong and resilient and so it was great to see her get some happy news for once.  It was also a nice change around to have Della providing Woods with a shoulder to cry on when his father dies and he's left in charge of the family business.

Woods has always been one of my favourite characters in the series.  He adores Della and worships the ground she walks on and he would do anything for her.  I did think he got a little bit needy at times when he had to have Della near him constantly but it was also sweet and very romantic.

Now, I thought this book was brilliant and I really, really enjoyed reading it but I have to admit that I wasn't a huge fan of a major twist that takes place at the end.  I can understand why Abbi decided to follow this path but it slightly took the gloss off what up until that point had been a pretty much perfect read.  I can imagine that a lot of fans of the series may not be too happy about it but it does open up an interesting path for a couple of the other Rosemary Beach characters.  That aside, 'Simple Perfection' was fantastic and another five star read from the wonderful Abbi Glines.