Goodreads synopsis:
An ill-timed storm on Christmas Eve buries the residents of Gracetown under multiple feet of snow and causes quite a bit of chaos. One brave soul ventures out into the storm from her stranded train and sets off a chain of events that will change quite a few lives. Over the next three days one girl takes a risky shortcut with an adorable stranger, three friends set out to win a race to the Waffle House (and the hash brown spoils), and the fate of a teacup pig falls into the hands of a lovesick barista. 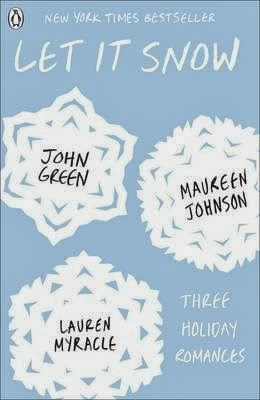 Review:
I decided to wait to read this one until December so that I could enjoy the Christmas themed stories in the run up to the big day.  You definitely want to start this title when you're curled up by the fire with a big mug of hot chocolate in your hands.  'Let It Snow' consists of three festive and inter-connected stories by bestselling YA authors John Green, Maureen Johnson and Lauren Myracle.  Each is extremely unique and quite quirky.  Personally I'm not a big fan of short stories as I often find that I'm not given enough time to become properly acquainted with the characters or that I'm just getting into a story when it's suddenly all over.  I did find this was the case with this collection although I still enjoyed it.

The first story is called 'The Jubilee Express' by Maureen Johnson.  It's about a girl called Jubilee who is on her way to stay with her grandparents for Christmas when her train gets stuck in the snow in the small town of Graceland.  Here she meets an interesting cast of characters who also feature later on in the book.  This is followed by John Green's 'A Cheertastic Christmas Miracle' which features Tobin and his friends trying to get to the Waffle House after finding out that fourteen cheerleaders have descended there after being stranded in town.  The final story called 'The Patron Saint of Pigs' by Lauren Myracle was actually my least favourite.  It centres around Addie who has promised to collect her friends teacup piglet but can't seem to focus after having split up with her boyfriend Jeb.

Each story centres around the themes of love and friendship.  They feature romance and new beginnings, as well as what happens when friendship turns into something more.  There's the promise of forgiveness and starting over, with all the characters' stories concluding in quite unexpected ways.  It's not the best Christmas book I've ever read but I still enjoyed this wintery, festive collection which would make a great present for the holiday season.