Goodreads synopsis:
Seventeen-year-old Eureka won't let anyone close enough to feel her pain. After her mother was killed in a freak accident, the things she used to love hold no meaning. She wants to escape, but one thing holds her back: Ander, the boy who is everywhere she goes, whose turquoise eyes are like the ocean.

And then Eureka uncovers an ancient tale of romance and heartbreak, about a girl who cried an entire continent into the sea. Suddenly her mother's death and Ander's appearance seem connected, and her life takes on dark undercurrents that don't make sense.

Can everything you love be washed away? 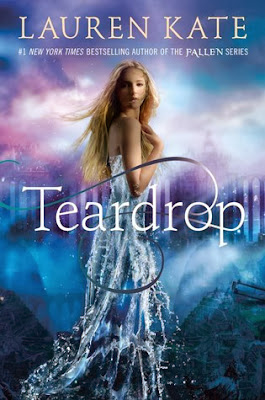 Review:
'Teardrop' is the first book in Lauren Kate's new series.  After the huge success of her Fallen series it has high expectations resting on it's shoulders.  The cover is absolutely stunning!  All the artwork for Lauren's books have been amazing so far but this one is achingly gorgeous.  There's no way that you could resist picking this off the shelf.

I loved the whole concept for the book which is unique and original.  The way in which Lauren Kate has combined elements of mythology with a modern day story is extremely clever and I thought the idea that Atlantis could be raised again by one girl's tears was brilliant.  Although I did think it was very slow at the start, it really picked up at the half-way point and from then on I was hooked.  If you find the same as me at the start and your attention wanders a bit, then I would strongly suggest you stick with it because the plot totally sucked me in during the latter half of the book.

I wasn't hugely keen on the main character Eureka but she grew on me throughout.  A large part of the book deals with her grief about her mother's death, but things get a lot more interesting when she discovers that her mother Diana was keeping some pretty major secrets which she begins to unravel with the help of the mysterious Anders.  Eureka is strangely drawn to Anders who I liked immediately.  I do hope there's more romance between the two of them in further instalments of the series because I thought it was a little lacking at times.

The ending was fantastic and I have a feeling that although 'Teardrop' may have been a bit of a slow burner, the rest of the series will be amazing.  I can't wait to see how Lauren Kate will transition the story into a more mythological realm and how she will take the characters down their new future paths.