Today I'm taking part in the blog tour for Anna Todd's Wattpad sensation 'After' which is now being published in print by Simon and Schuster.  Read on for my review.

Goodreads synopsis:
There was the time before Tessa met Hardin, and then there’s everything AFTER... Life will never be the same. Tessa is a good girl with a sweet, reliable boyfriend back home. She’s got direction, ambition, and a mother who’s intent on keeping her that way. But she’s barely moved into her freshman dorm when she runs into Hardin. With his tousled brown hair, cocky British accent, tattoos, and lip ring, Hardin is cute and different from what she’s used to. But he’s also rude—to the point of cruelty, even.

For all his attitude, Tessa should hate Hardin. And she does—until she finds herself alone with him in his room.  Despite the reckless way he treats her, Tessa is compelled to dig deeper and find the real Hardin beneath all his lies. He pushes her away again and again, yet every time she pushes back, he only pulls her in deeper.

Tessa already has the perfect boyfriend. So why is she trying so hard to overcome her own hurt pride and Hardin’s prejudice about nice girls like her? Unless…could this be love? 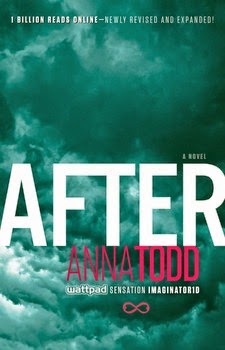 Review:
'After' by Anna Todd originally started out as a Wattpad sensation.  It's now appearing in print for the very first time and as soon as I heard about it I couldn't wait to start reading it.  It sounded like exactly the kind of book that I usually love.

The first book in a series, the story follows teenager Anna who is starting college and finally getting out from under the eagle eye of her controlling mother.  Anna is extremely innocent and quite naive about some things.  She doesn't know what to think about Hardin when they first meet, especially considering he is so rude and at times pretty cruel towards her. But there's a fine line between love and hate and Anna seems to be straddling the two.

There were aspects of this book that I did like but I thought that the story was quite slow at the beginning and the plot felt like one that I'd read before. I wanted to see more of Anna's college life and her experience of settling in and making new friends but instead she seemed far too consumed by her relationship with Hardin to invest time in anything else. Considering the way in which he talks to her and treats her I found it hard to understand why she was quite so obsessed with him and willing to put up with his behaviour. She makes a lot of excuses for him.

Hardin was a difficult character to like. Because I didn't really warm to him at all, It was hard to become fully invested in the romance between him and Anna. He uses her inexperience to keep her close and almost expects her to read his mind at times. I kept waiting for that one big redeeming moment when I would finally fall head over heels for Hardin and realise that he had a heart of gold after all but it never came. There is a big revelation about his family and his past near the end of the book and while I felt sympathy for him and what he had gone through, for me, it didn't excuse the way in which he had acted towards Anna.

I'm interested enough in the story to wonder what will happen next so I will be checking out the next instalment in the trilogy, but I really, really hope that Hardin's personality develops because Anna deserves better.