One More Chance by Abbi Glines, published by Simon and Schuster on 2nd September 2014

Goodreads synopsis:
Grant Carter did everything in his power to convince Harlow Manning that he was a good guy. More than a smooth-talker and someone she could trust. He had to overcome his reputation as a playboy, and his history with Harlow's half-sister, Nan, a woman with a reputation of her own.

Harlow had taken the chance, falling hard and fast for the guy who thrilled her with his all-consuming desire. After a lifetime of avoiding bad boys like Grant, she had opened herself to the possibilities of love...

But a life-changing secret has torn them apart, and now Grant and Harlow must decide if they have enough fight to make it work - or if the pain of betrayal has permanently destroyed their future. 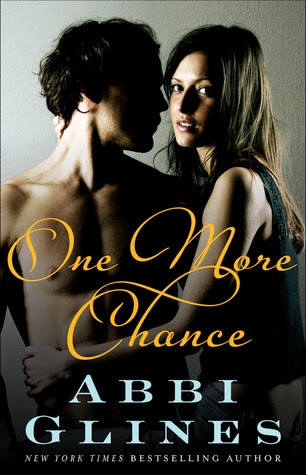 Review:
This is the concluding part of Harlow and Grant's story which began in 'Take a Chance'.  I found it one of the most emotionally moving books that I've read so far in the series.  It was hard to see the words on the page at times because I was crying so much.

The point of view alternates between Harlow and Grant as we get to see them on the next stage of their journey together.  The narrative intersperses various letters as well which really added such a poignancy to the book.  It goes without saying that I loved Grant but actually I adored Harlow too.  She is such a pure-hearted and good person, both inside and out, that you cannot help but wish that you had someone like her in your life.

The book was a quick read but only really because I couldn't put it down!  I always have to read Abbi's books in one sitting because they are so wonderfully good and totally addictive.

I love the Rosemary Beach crowd and it was great getting to see some of the other characters again.  I was taken aback by the unexpected act carried out by one of them and thrilled to see them all taking such a big part in each others' lives.  I'm over the moon as well that we will finally get to read about Tripp and Bethy who are the subject of the next book.  I think that this is the one that we've all been waiting for!

Pitched absolutely perfectly, Abbi Glines will break your heart with this story of a love so strong and true that it can conquer any adversity.  A perfect fairy tale finish for one of my favourite couples.
Posted by Samantha (A Dream of Books) at 11:08