Kit by Marina Fiorato, published by Hodder and Stoughton on 16th July 2015

Goodreads synopsis:
Dublin 1702...and Irish beauty Kit Kavanagh has everything she could want in life. Newly married, she runs a successful alehouse with her beloved husband Richard. The wars that rage in Europe over the Spanish throne seem a world away. But everything changes on the night that Richard simply disappears. Finding the Queen's shilling at the bottom of Richard's tankard, Kit realizes that her husband has been taken for a soldier.

Kit follows Richard's trail across the battlefields of Italy in the Duke of Marlborough's regiment. Living as a man, risking her life in battle, she forms a close bond with her wry and handsome commanding officer Captain Ross. When she is forced to flee the regiment following a duel, she evades capture by dressing once more as a woman. But the war is not over for Kit. Her beauty catches the eye of the scheming Duke of Ormonde, who recruits her to spy upon the French. In her finery she meets Captain Ross once again, who seems just as drawn to the woman as he was to the soldier. Torn between Captain Ross and her loyalty to her husband, and under the orders of the English Crown, Kit finds that her life is in more danger now than on the battlefield. Of all the dangers that she faced, the greatest was discovery... 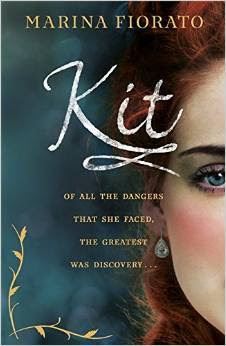 ‘Kit’ is the new title from the pen of Marina Fiorato. I always enjoy her books because she brings to life her characters so brilliantly and writes vividly about many different periods of history. After I’ve finished her books, I’m usually left feeling inspired to find out more about all of the history. ‘Kit’ is based on the true story of a woman who disguised herself as a man to try and bring her husband back from the wars. In the novel, the character of Kit, ends up risking her life in battle and unexpectedly finds her heart becoming entangled with her commanding officer, Captain Ross (who cuts quite the dashing figure!).

I thought that the story had something of a Shakespeare-esque element about it. Marina Fiorato possibly drew on some of Shakespeare plays, where the female character frequently disguises herself as a man to avoid detection. It was interesting to see the lengths that Kit had to go to in her quest to hide her gender and the way that she goes undiscovered for such a long time. Kit herself is a really feisty and fierce main character. She has many predominantly male characteristics and it’s intriguing to see how these aspects of her personality develop when she is disguised as the opposite sex. I loved her growing bond with the Captain and the way their relationship develops throughout the story.

Fast paced and with a gripping plot, I thought that ‘Kit’ was a great book. I have to say that I didn’t love it quite as much as some of Marina Fiorato’s earlier novels but nevertheless it was an enjoyable read, set during a fascinating historical period. I didn’t know a lot about the European wars which took place during the eighteenth century but I’m a lot more educated on the subject now.

Historical fiction fans will lap this up and if you’ve yet to discover Marina Fiorato’s books then what are you waiting for!
Posted by Samantha (A Dream of Books) at 00:00