Goodreads synopsis:
Sonny Ardmore is an excellent liar. She lies about her dad being in prison. She lies about her mom kicking her out. And she lies about sneaking into her best friend's house every night because she has nowhere else to go.  Amy Rush might be the only person Sonny shares everything with— secrets, clothes, even a nemesis named Ryder Cross.

Ryder's the new kid at Hamilton High and everything Sonny and Amy can't stand—a prep-school snob. But Ryder has a weakness: Amy. So when Ryder emails Amy asking her out, the friends see it as a prank opportunity not to be missed.

But without meaning to, Sonny ends up talking to Ryder all night online. And to her horror, she realizes that she might actually like him. Only there's one small catch: he thinks he's been talking to Amy. So Sonny comes up with an elaborate scheme to help Ryder realize that she's the girl he's really wanted all along. Can Sonny lie her way to the truth, or will all her lies end up costing her both Ryder and Amy? 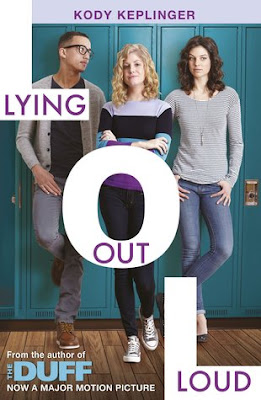 Kody Keplinger is the Queen of High School YA fiction.  She always seems to be able to perfectly capture the authenticity of teenagers learning life lessons about love, family and friendship, while surviving the rigours of the school environment.  I will read anything that she writes!
‘Lying Out Loud’ is about Sonny Ardmore and Amy Rush (sister of Wesley from The Duff).  Sonny is having problems at home and goes to live with Amy and her family but can’t bring herself to tell them the truth about what is going on.  Fact: Sonny is an excellent liar but her lies are about to get her into a whole heap of trouble.
When Ryder Cross starts at Hamilton High, boy troubles are most definitely on the horizon.  Will he be the reason that Amy and Sonny’s friendship falls apart?
Although the story is told from Sonny’s point of view, at times I actually identified more with Amy.  I didn’t like the way that she let herself be pushed around by Sonny, so it was good to see her standing up for herself more by the end and developing a new sense of confidence.  It just goes to show that you can have a privileged lifestyle with a bright future in front of you but you can still struggle with self-confidence issues.
As this is a kind of companion novel to 'The Duff', it was great seeing Wesley and Bianca in the story.  They are still together and although they seem like complete opposites at times, they just work.
I loved this book.  I sped through it so quickly because it was an amazing read.  Kody Keplinger is on my auto-buy list.  I’ve loved all of her books so far and I’m excited to see what she will write next.
Posted by Samantha (A Dream of Books) at 00:00