The Potion Diaries by Amy Alward, published by Simon and Schuster on 2nd July 2015

Goodreads synopsis:
When Nova's princess (more Kate Middleton than Rapunzel!) is poisoned by her own love potion, the city's alchemists are entered into a deadly, high-profile quest to find a cure. It's the chance of a lifetime for Sam's alchemist family, who have been mixing magic potions for generations... but can Sam save their crumbling reputation?

Sam must choose whether to work with or against her best friends, Anita and Arjun, and finds herself thrown towards Zain, heir to the ZoroAster synthetic potions corporation, and her arch enemy. He also happens to be the boy most likely to marry the princess...

With the nation's media watching her every move, Sam overcomes incredible dangers and impossible dilemmas in order to hunt down the ingredients: a mermaid's pearl, pink jasmine, Eluvian ivy, hair from an abominable and a unicorn's tail. Tricky. Can Sam save the now dangerously powerful princess by winning the contest? And just how close are she and Zain willing to get in the meantime? 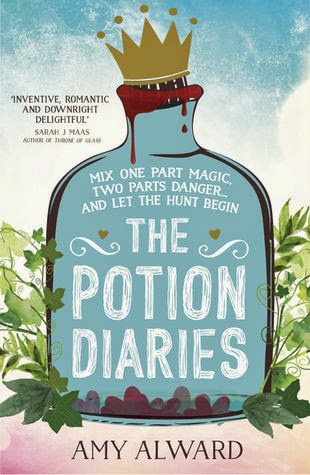 Review:
Described as "The Hunger Games meets The Princess Diaries" if ever a tagline is going to make me want to read a book, that is it!  And what an unusual book, 'The Potion Diaries' by Amy Alward turned out to be.  Unusual in a good way but not at all what I was expecting.  It leant much more heavily towards the fantasy genre but was unlike anything else I've read before.

The book combines a modern setting with one where magic is still prevalent.  This took a bit of getting used to because it's not every day that you experience magic being talked about in such a matter of fact way.  The main character Samantha Kemi has the ability to mix potions.  Her talent as an alchemist is second to none and is needed when her family are summoned to take part in an ancient quest to save the Princess from a potion gone awry.  Fantasy, magical adventures and drama aplenty enthuse, as Sam joins the hunt to find all the ingredients for an anti-dote.

I have to admit that I wasn't immediately hooked by the story, although I loved the premise.  I didn't really get engrossed in it properly until at least six or seven chapters in, so stick with it if it is the same for you because it's definitely worth it.  The hunt itself was intriguing and trust me, you wouldn't even begin to be able to predict what was going to happen.  It's best to just strap in and enjoy the ride.

I loved the character of Sam.  She is brave, resourceful and talented but also incredibly modest.  She wants to win the quest so that she can help provide for her family but along the way she learns a lot about her own abilities and talents.  Handsome Zain is one of her rival competitors.  Dark black hair and blue eyes is always a killer combination, so I was drawn to Zain even though I didn't know if he could be trusted.  There are romantic sparks between the two of them, although the romance angle takes more of a backseat to the quest itself, so more romance and kissing next time please!

The book's recipe is to take a dash of humour and a sprinkle of romance.  Stir it up with adventure, excitement and danger and you have 'The Potion Diaries'.