With Malice by Eileen Cook, published by Hot Key Books on 9th June 2016

Goodreads synopsis:
When Jill wakes up in a hospital bed with her leg in a cast, the last six weeks of her life are a complete blank. All she has been told is that she was involved in a fatal accident while on a school trip in Italy and had to be jetted home to receive intensive care. Care that involves a lawyer. And a press team. Because maybe the accident…. wasn't just an accident.

With no memory of what happened or what she did, can Jill prove her innocence? And can she really be sure that she isn't the one to blame? 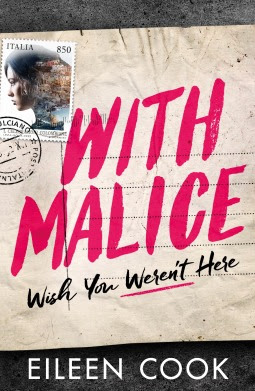 Review:
I love a good YA thriller and 'With Malice' by Eileen Cook ticked lots of boxes for me.  It actually reminded me of '13 Minutes' by Sarah Pinborough in the way that the main character gradually has to regain her memories of a pivotal event and how the storyline unfolds like a puzzle - piece by piece.

The central protagonist, teenager Jill, wakes up in hospital after a terrible car crash which happened during a school trip to Italy.  She has lots of questions about who was involved and what caused the crash and is shocked to discover that she was the one driving the car.  Was she responsible?  As readers, we are left as clueless as Jill.  Her memories and dreams begin to construct events but are they real and can they be trusted?

The plot unravels slowly and I found the pace of the book a little frustrating.  Small fragments of information are drip fed to readers by the police interviews which feature throughout the story and by the online comments.  These are left by friends, acquaintances and members of the public who comment on what has become an international incident.

I really liked 'With Malice', although I felt that the ending let it down.  The big finale wasn't as dramatic or as satisfying as I was expecting and it was somewhat of an anti-climax after the brilliant build-up which preceded it.  It was also very ambiguous which isn't something I normally like.  You are left to draw your own conclusions in the end about what you believe is true or false.

This was a fairly quick read which overall I really enjoyed.  There were a few things about it which bothered me and some loose plot threads which could have done with tightening up but that aside, it was just the kind of thriller that I like.
Posted by Samantha (A Dream of Books) at 06:30