Review: And I Darken - Kiersten White

And I Darken by Kiersten White, published by Corgi Childrens on 7th July 2016

Goodreads synopsis:
No one expects a princess to be brutal. And Lada Dragwyla likes it that way.

Ever since she and her brother were abandoned by their father to be raised in the Ottoman sultan’s courts, Lada has known that ruthlessness is the key to survival. For the lineage that makes her and her brother special also makes them targets.

Lada hones her skills as a warrior as she nurtures plans to wreak revenge on the empire that holds her captive. Then she and Radu meet the sultan’s son, Mehmed, and everything changes. Now Mehmed unwittingly stands between Lada and Radu as they transform from siblings to rivals, and the ties of love and loyalty that bind them together are stretched to breaking point. 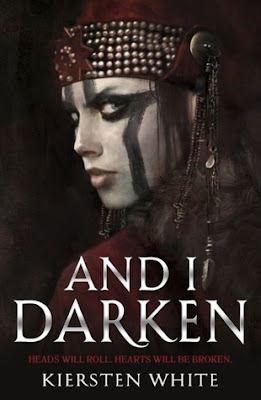 Review:
'And I Darken' is the first in a new trilogy by author Kiersten White, who has reimagined Vlad the Impaler as a female called Lada and has set about breathing new life into a series of historical characters.
I loved the start of the book.  I was absorbed by the story and the characters and I couldn't put it down.  I'll admit that my interest waned a little in the middle when I felt the pace of the story got a bit bogged down but then it picked up again at the end and I was sucked back in.
I haven't seen a female heroine like Lada before in YA.  She is most definitely an anti-princess.  She refuses to be beholden to anyone, she fights as well as any man and she is determined not to let anyone control her or own her.  Occasionally, I found her quite difficult to like.  She's so tough and prickly that it's hard to get past the armour she surrounds herself with.  Her achilles heel (if indeed she has one) is her love for her younger brother Radu.
Radu was my favourite character in the book.  There is a lgbt angle to his storyline which was well written and depicted.  He spends a lot of the story conflicted about his feelings but I really felt that he came into his own in the second half.  He and Lada have a complex relationship which only becomes more complicated when they meet Mehmed, the son of the Sultan.
Brutal and bloody, 'And I Darken' pulls no punches and spares you nothing.  It's very in your face.  It blends historical fiction and fantasy together brilliantly and is an extremely intriguing opening to the series.