Review: The Boy Most Likely To - Huntley Fitzpatrick

The Boy Most Likely To by Huntley Fitzpatrick, published by Electric Monkey on 9th June 2016

Goodreads synopsis:
Tim Mason was The Boy Most Likely To find the drinks cabinet blindfolded, need a liver transplant, and drive his car into a house.

Alice Garrett was The Girl Most Likely To . . . well, not date her little brother’s baggage-burdened best friend, for starters.

For Tim, it wouldn’t be smart to fall for Alice. For Alice, nothing could be scarier than falling for Tim. But Tim has never been known for making the smart choice, and Alice is starting to wonder if the “smart” choice is always the right one. When these two crash into each other, they crash hard . . . 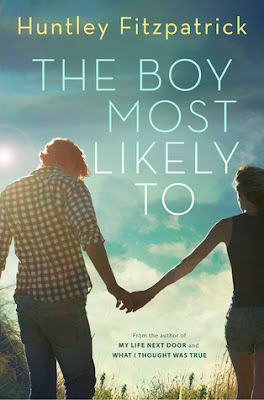 Review:
I was really looking forward to read 'The Boy Most Likely To' the follow-up to Huntley Fitzpatrick's novel, 'My Life Next Door'.  I loved the latter which featured the romance between Samantha and Jase and I was excited about picking up with all the characters again.  I was however, a little worried about the fact that the story this time around focuses on the relationship between Jase's sister Alice and Tim who we were previously introduced to.  Alice I liked but I didn't feel the same about Tim.  I just had my fingers crossed that he would begin to grow on me. Sadly that didn't happen and while I enjoyed elements of this book, Tim failed to win me over.

Alice has a lot on her plate and has taken on responsibility for helping to keep her family together while her father is in hospital recovering from an accident.  She is trying to finish nursing school, at the same time as supporting her mother with babysitting and keeping track of the family finances.  She definitely doesn't have time for romance and certainly not with Tim who comes with his own set of issues.  Whereas Alice is extremely adult in nature, Tim is the complete opposite.  He is royally screwing up his life and seems much more immature.

There is a pivotal event in the book which begins to change Tim's outlook on life.  I won't spoil it and mention what it is but I didn't like this element of the storyline and I found it quite contrived.

I was also slightly disappointed that we didn't get to see more of Jace and Samantha.  They appeared at various moments in the book but they were always in the background and didn't feature in the main plot at all.  I would have much preferred a follow-up to their story, rather than Alice and Tim.

What I did love was the Garrett family.  The children are all adorable, especially George who is so sweet and asks the best questions.  I enjoyed reading about them and they pop up a lot throughout the story.

This book took me a long time to finish which is unusual for me as I normally read very quickly.  I think I was really looking for something which was a bit more light-hearted for summer and this most definitely wasn't it.